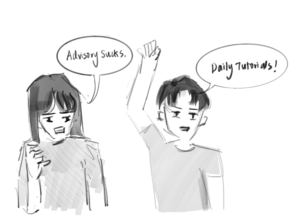 Photo by Annie Liu
Students advocate for various changes to the school, which mostly go ignored or take a long time to be addressed.

Permalink
Student opinions are too often drowned out by parents who advocate for proposals that don’t directly impact them.

SHS students have been advocating for using bond funds to improve the school’s energy usage through various projects such as installing solar panels for over a decade. Though the board is now considering four options to install solar panels, until recently, there was consistently zero sign of action in response to students’ pleas.

Instead, the project had been opposed — former principal Paul Robinson and others worried solar panels would impact the “aesthetic” of the school. After spending millions on projects such as a new baseball field, Measure E funds were no longer sufficient to build solar panels.

The only place for students to attempt to change this and advocate for solar panels is at board meetings, but the majority of students do not have time to attend board meetings because they are too busy with their homework, sport and other activities. This inconvenience prevents many student voices from being heard by the board.

The five-member board — Theresa Bond, Cynthia Chang, David Guidry, Peter Hertan and Katherine Tseng — should be laser-focused on making decisions based on student demands. After all, we have to deal with the consequences of their decisions. So, the board voting system should also be modified to allow room for even more student representation.

For one thing, surveys of students (not parents) should play a more major role in many board decisions such as the bell schedule.

Of course, students don’t need to weigh in on routine decisions like which contractor wins a project bid. But dozens of other decisions affect students such as budgets and various policies, and students deserve to be heard.

These surveys should be advertised on various platforms to ensure the majority of the student body is offered a chance to vote. Effective ways to advertise would include posting on school ASB social media accounts, morning announcements and having teachers remind students.

Furthermore, this semester, it has seemed like every other week there has been some form of a “special” bell schedule consisting of daily tutorials and 85-minute periods that make room for spontaneous rallies and advisories.

These special schedule days showed teaching and learning can happen in 85-minute periods. For most of the year, though, members of the district board ignored student and faculty survey input and sought to keep 90-minute periods in a new bell schedule next year. If this thinking had won out, there would be tutorials on Blue Days only next year, just as we have in this year’s highly unpopular schedule.

This is not a new issue: Students have been advocating for daily tutorials since the beginning of 2020. Despite this, the board has continued to delay making a final decision on the bell schedule for the 2022-2023 school year. In opposing a schedule with shorter class periods, some board members have cited parent concerns that students are not receiving enough instructional time.

Both Los Gatos and Saratoga suffer from a large population of helicopter parents, with some Los Gatos parents going so far as to lead recall efforts against board members they don’t like. These parents have also forcefully imposed their opinions upon others at board meetings, occasionally silencing and belittling opposing viewpoints, as seen in the notable 2021 Phase 4A LGSUHSD reopening meeting.

The board has sometimes seemed to make decisions solely based on the loudest voices in the room, which, all too often, belong to parents who go against the majority of students’ best interests.

Instead, board members should weigh student and teacher opinions more heavily in their decision-making process. Another common-sense reform is to tighten eligibility requirements to become a board member, including term limits.

The majority of current board members have had students attend either SHS or LGHS in the past, but most of their children have already graduated. Thus, their decisions don’t impact them directly and they don’t have the same first-hand knowledge as current parents. Without a student at home providing feedback on topics such as schedule changes and course requirements, many board members lack insight into student opinions.

Board members should have a two-term limit, and voters should be voting for prospective board members who have stronger relevance to SHS or LGHS, such as having a child either currently enrolled or enrolled at either school within the past six years. Having term limits would ensure that board members don’t hold onto outdated opinions of how schools should be run based on board members’ experiences with the school from many years before.

While having board members with current students on the board may pose an issue of biased decisions and votes, there are ways to mitigate this as well, such as encouraging each board member to provide a logical reason behind their vote before they cast a vote.

If the provided reason for a vote seems illogical or biased to community members, they should be able to petition to have the vote repealed or vote out the board member at the next election. This allows the community to better hold board members accountable for their actions, as board members would be discouraged from favoring loud interest groups over the majority opinion.

A lack of communication between board members and students coupled with parents constantly chiming in with their opinions and board members often maintaining outdated information has led LGSUHSD to too often disregard student opinions on many matters. These ideas and others might help make the board accountable to its most important constituency.