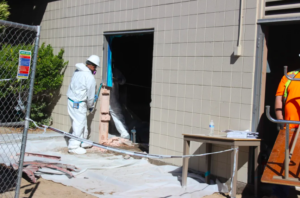 Construction workers work on updating the entrance to the 900 building

For the past few months, the district has been planning more improvements to campus, all funded by the Measure E bond. These changes include renovating the 900 building formerly occupied solely by M-SET robotics to include a science classroom, upgrading the engineering lab as well as improving the baseball field.

The most active project right now is the upgrading of the 900 building, which began on Oct. 1 and will end around the middle of February. Part of the building will be converted to a science classroom and the rest will still belong to robotics. The project is expected to be finished by the middle of February and cost around $3.65 million according to the Measure E Bond Oversight Committee’s expenditure report from May 26.

The district decided to renovate the 900 building because of safety concerns. Assistant principal Matt Torrens said that the building, which was built in 1959, is not up to current standards in terms of its electricity, plumbing, siding and brick work.

Many robotics students were displeased by the room’s state from a lack of maintenance. Sophomore Ainsley Sheen described the robotics room as “small, dirty, really drafty, and if people were using machines, really loud as well.”

With the renovation, construction company CRW Inc. will install new electrical outlets and repair the roof and walls.

The district decided to create a new science classroom because physics and engineering teacher Matthew Welander was switching classrooms between periods and could not have his own room in three of the last seven years. His classrooms changed every year, so he never wanted to store his own materials in the classrooms he was sharing or put up decorations.

Welander was also frustrated with spending additional time to set up and transport materials, especially when he wanted to do demonstrations or labs.

“Some years I had no other option but to do this during lunch or during tutorial, so it meant eating on the go or telling students I couldn't help them because I had to move class materials to a different room,” he said.

Welander finally received his own classroom this year, but this happened only because there were fewer science classes compared to previous years.

As their workspace undergoes construction, the M-SET robotics club has temporarily gathered at different locations. The First Tech Challenge (FTC) team has moved to an old ASB storage room, and the First Robotics Challenge (FRC) team has moved to the MAP annex. To maximize social distancing, the club is currently working outside in the hallways.

“The old 900 building was definitely falling apart, so we are glad that it is finally being taken care of,” she said. “However, our FRC and FTC programs have become really physically separated because of this move, and the FTC teams’ access to manufacturing tools that used to be in the FRC room and engineering lab is now compromised.”

Jain said that working in a different room was tough at first because they had to move a lot of equipment, especially for the FRC team. It was difficult for them to figure out what parts and machinery they needed in the limited space.

After the renovation is finished, M-SET will move back into the 900 building, but Jain is concerned about having to work and store materials in only one room once they transition back.

“M-SET was already pretty cramped in the old rooms that we had,” she said. “With our club normally having around 100 students and anywhere between 10 to 15 adult mentors, the space that we have to work with is really important to us.”

If the club is not given an additional room to work with, it may be necessary for them to reduce the number of students who can participate, though Jain is reluctant to do so.

“The mission of MSET has always been to allow students to explore and learn engineering regardless of their prior experience,” she said. “I feel like having to deny even more students to the program because of space constraints would be counterproductive to our mission.”

If the 900 building renovation is finished in February as currently scheduled, there is a chance that anatomy and physiology teacher Kristofer Orre will use that room if the school reopens in the spring. He is currently sharing a classroom with science teacher Cheryl Lenz.

If Orre does not move into the new room,  the engineering teachers may use it while the engineering lab is under construction. The teachers on the design team made sure the new classroom in the 900 building was as flexible as possible so it could be used by almost anyone, Welander said.

The engineering building renovation is the next project on the list after the 900 building. Currently, there are many safety hazards inside the building and several parts of the room do not conform with the American Disabilities Act (ADA), which states that school facilities should be safe for all students.

The engineering building used to be a wood and auto shop, so it has a strange structure. For example, there are stairs that go down to a room four feet lower than the rest of the building, which is illegal. It is also the only room on campus that does not have heat and air conditioning.

The project, which will cost an estimated $2.6 million, entails structural changes as well as installing new equipment. The goal is to modernize the space and turn it into a 21st century engineering hub.

“Engineering tools and machines are constantly evolving, and to really prepare students to go off to college and become engineers, we need the space to evolve as well,” Welander said.

The renovations will also provide additional space for tools and storage and make the room as flexible as possible.

On top of these two projects, Measure E will provide a projected $2.5 million for rebuilding the baseball field, most of which will be used to improve safety. One concern the school has is that foul balls can soar over the fence and injure someone on the track next to the baseball field. The dugouts are also not legal since the steps are not far apart enough and the entrances are too narrow.

The school plans to move the field a few feet farther from track and put a large net in between. They are also hoping to cover the field in artificial turf, as it is the last remaining grass field in the district, but the school board still needs to agree to it.

Currently, the district is soliciting bids from construction companies, and once the bids come back, they will make a decision on whether to re-turf the field.

If the district approves the plans, it will be very beneficial for the baseball team.

During California’s rainy season, rolling out the tarp over the baseball field is a routine part of practices alongside fielding, hitting and pitching for baseball players. If the field is left uncovered during a rainy day, the field is left muddy and unplayable for days.

Senior captain and star pitcher Philbert Fan recalls many games and practices being called off due to rain during his freshman season, during which the team had to spend hours tarping the field and scooping up goose droppings instead of playing baseball.

“Having a chunk of the season being taken out because of weather is incredibly frustrating,” Fan said. “It felt like half of our home games were rained out that year. The rainouts also put us at a disadvantage to other teams who have turf because they are able to spend more time on the field.”

Fan is relieved that the field will finally be replaced with a turf field because of numerous issues with the current grass and dirt field.

“It’s exciting that there’s going to be turf because our field is infamous for how bad it is,” Fan said. “There are so many holes in the outfield that can cause rolled ankles, so turfing the field and making adjustments to its dimensions will also help the efficiency of practices.”

He is happy for his younger teammates, as they will have much more time to play baseball and take the team to win a CCS championship.

An artificial turf baseball field will also help with the overlap from fall to winter and winter to spring sports as well as provide another venue for color guard and the band.

School construction is expensive and time-consuming since the district has to make sure it conforms with all state regulations, Torrens said. In the end, though, he expects a big payoff in terms of more usable facilities.

Andrew Li and Christopher Chen contributed reporting to this story.