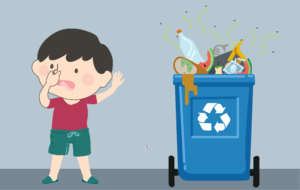 Every Friday, a McNeilus garbage truck pulls into the back parking lot to empty gray recycling bins. In over three months, however, the waste in these bins — filled with too much garbage, not enough recyclables — have not been taken away.

This is one of the major challenges the school faces in trying to become greener. To reduce waste on campus, students need to start using recycling bins correctly and more total recycling bins are needed, school officials say.

The recycling bins currently on campus have all been rejected by West Valley Collection for over three months as rotten food mixed in with other items makes the entire bin invalid for recycling. One problem is the gray color of the bins, which students mistake as indicating they’re for trash. Until new blue recycling bins from West Valley arrive, this will continue to be the case.

Paul Weir, the school’s plant manager, oversees campus maintenance and facilities. He sees the positive efforts some students have made but also the difficulty at succeeding in the daily battle against the tons of waste the school produces annually.

With a limited number of outdoor recycling bins on campus, it’s essential that they actually be filled with recyclable items, Weir said. Too often, items like food, used napkins or plastic wrap — often discarded into bins by students after lunch.

“It’s taken me months to get the recycling bins dumped. I even told them ‘I’ll pay you, come and take it as trash, I need it off the campus,’” Weir said. “I have debris in here that is three months old and rotting, so it is now a health issue.”

“This high school is a machine: It has people in it from 5 in the morning till 10 at night, seven days a week,” he said. “The trash that’s generated comes from the community, the students, the cafeteria and the classrooms.”

To combat this problem, Weir has recently spoken to West Valley Collection & Recycling, the school’s waste management service, about disposing of old bins and purchasing 30 new bins. However, according to Weir, the delivery of the new recycling bins has continually been delayed due to unresponsiveness from West Valley Collection’s supervisors.

And while having additional recycling bins would theoretically be more helpful, Weir said the added bins wouldn’t be as effective without a change in students’ actions.

“I would love to and need to appeal to the students,” he said. “I really need students to be educated and care enough to recognize what is recycling and what isn’t.”

Recently, Weir has started working with the Green Team, a student-run club on campus, to address school waste and environmental consciousness.

Last year, in an effort to promote recycling on campus, the Green Team partnered with ASB to draw attention to the recycling bins in the quad by painting and decorating them.

However, policy changes have been harder to implement. According to assistant principal Matt Torrens, it is difficult for the school and club to work together to implement substantial change due to a lack of consistency caused by yearly turnovers in club leadership.

“The projects take until October to get rolling, the holidays are difficult and then we have a couple of months before AP testing and clubs go quiet,” Torrens said.

Despite this hurdle, the Green Team’s primary goal this year is to make significant progress on improving the school’s recycling habits, said the club’s president, senior Cici Xu.

The club plans to educate students on proper waste disposal practices and encourage students to learn more about ecological advocacy. Xu hopes that composting services on campus will be in place by the end of the year, and more attention will be brought to the issue of adding solar panels to help meet the school’s energy needs.

Weir and the Green Team have had difficulties implementing change due to COVID-19 health guidelines that prevent the sorting and filtering of collected recycling. As a result, since before the pandemic began, the school has regularly needed to discard all contaminated recycling.

Though the school has not completed any recent analysis of its carbon footprint, an energy audit conducted in 2011 showed the district’s energy usage far exceeded that of neighboring districts included in the study, with SHS consuming 25.2 percent more energy on average.

Many of the report’s suggestions, including updating lighting systems and installing solar panels at both Los Gatos and Saratoga High, have gone unimplemented, as the cost of the projects, according to the energy audit, would total to nearly $2 million with a payback time of 11 years.

However, as more houses and institutions switch to sustainable energy sources, the price of solar panels has gone down nearly 70% in the past decade, according to a study from the Solar Energy Industries Association.

In 2016, the Green Team was able to introduce a proposal for solar panels to the school board, but the idea was abandoned because the cost of solar panels takes too long to break even. Another complaint that has kept them from being instituted at the school are concerns about how they would look and change the aesthetic of the neighborhood.

Solar panels aside, the school has introduced methods to reduce energy usage including the purchase of new windows and blinds that conserve electricity by reducing energy loss through windows, as well as upgrading the air conditioning and heating capabilities to become more efficient and comply with the county’s indoor COVID-19 guidelines.

Now that students are back to in-person school, the administration is shifting its focus from online learning to working on reducing SHS’ carbon footprint by reducing paper and plastic dependence, principal Greg Louie said. Although various school officials have echoed this sentiment, little concrete action is visible on campus.

Though the Green Team’s and Weir’s efforts are important, Weir said that they alone are not enough. He said students need to care about environmental change and help promote recycling, as unrecycled trash adds up, contributing to greenhouse gas emissions and climate change.

“We’ve started ecological dominoes that are falling in sequence” Weir said. “We can calculate our carbon footprint and predict things, but we need to do something about it. The students need to care.”