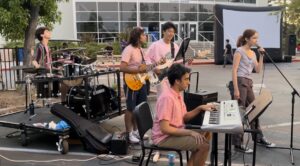 Photo by Zach Zinman
Peach Fuzz performs in front of the McAfee Center during the Falcon Food Truck Fest on Aug. 16.

Permalink
The band has performed twice at the school and has their sights set towards performing at venues in the future.

A crowd gathered in front of a small band setup during the annual Falcon Food Truck Fest on Aug. 16 as the drumline to “Sofia” by Clairo began. Student band Peach Fuzz grabbed the attention of students and parents, drawing fest-goers from food trucks and backyard games to the corner of the visitor parking lot.

The band, originally composed of just Marquez, Ramirez and Zinman, formed after being asked to play together in October 2021 for a Culture of Consent rally. Although their busy schedules led to the trio stop playing last year, the band resumed practicing shortly before the food truck fest with the additions of Li and Iyer, who were both recruited by Zinman. The day prior to their performance, the five members rehearsed for several hours nonstop at Zinman’s house. They had fun “jammin’ out” to a setlist Ramirez had crafted, Zinman said.

Zinman explains the story behind the band’s name as an interesting one — Zinman and Marquez decided they were in the imminent need of a band name since they were performing at the food truck fest, so Zinman sat down with his parents and asked for their suggestions.

“They asked, ‘What words do you associate with the vibe of the band?” he said. “And I said ‘Well, I really like peaches.’ And thus, our name was decided as Peach Fuzz because it makes fun of teenagers both unironically and ironically at the same time.”

Since they are close friends, the five members enjoy an easy-going dynamic and look forward to practices — usually planned spontaneously — and performances. Marquez and Zinman have been playing music together for almost a decade, first in a band during their elementary school years and then while hanging out on their own; according to Zinman, it has been a large part of their friendship.

Now, Marquez said he feels that they are completely in tune with one another. The rest of the band has also naturally adapted into each other’s playing styles which contributes to an uplifting rehearsing environment, Ramirez said.

Playing live, however, is a different experience. At the start of a set, Marquez, Ramirez and Zinman have found performing to be stressful; it takes around a song for the band to fully get into the groove. Once the initial obstacle is gone, the aura completely turns around, Ramirez said.

“Sometimes, it’s a little stressful at first,” she said. “But once you’re really in the group, it’s a euphoric moment. It’s like you’re really living in the present.”

The community has responded excitedly to the budding band, with students gathering to watch them perform at the fest and the annual schoolwide barbecue later in August. Ramirez recalled that a pair of underclassmen students once approached soon after the fest and asked if she was the Peach Fuzz vocalist, before walking off, whispering to one another. In addition, they garnered positive feedback at the Homecoming rally in September; students and teachers held raised flashlights on their phones, cheering on the band. They also performed at the seniors’  Homecoming quad day on Sept. 23.

In the near future, they hope to start booking paid gigs outside of the school. They have their sights set on 924 Gilman, a nonprofit music club in Berkeley where bands can get on their feet, play, meet other artists and gain recognition.

“When we were getting back to school, I thought performing would be fun,” Ramirez said. “I hadn’t performed with them in a while. I was missing it.”