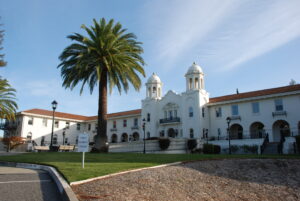 Photo by Selina Chen
The Odd Fellows manor would be obscured by a new building under the current plan.

“Do you see those two trees there?” Tsing Bardin, a resident of the Saratoga Retirement Community (SRC), a senior home near West Valley College, asked as she pointed at a pair of old growth redwoods. “No more.”

Shaking her head in disappointment, she turned toward a cluster of large palm and oak trees that line the front of the SRC’s iconic grand, white manor.

In order to increase the housing available for local seniors and help satisfy the new state housing requirements, Pacific Retirement Services (PRS), a group based in Oregon and hired by the Saratoga Retirement Community (SRC) to manage the senior center, submitted a proposal in 2019 that would add three buildings to the campus, totaling 52 new independent living units.

Although the plan is still under review, it has garnered strong opposition from a majority of current senior residents and some neighbors who share concerns over the proposal’s implementation and are advocating for an alternative plan.

The company has defended its approach by saying it is sound both economically and environmentally and the residents’ plan would not work.

But that argument has not won over residents like 88-year-old Robert Berglund.

“One of the things you’ll note about entering our campus is its open space, green grass, trees and the manor building,” said Berglund, who has lived in Saratoga since 1969 and moved to the SRC in the beginning of 2015 with his wife. “We don’t mind having additional independent living units. Our objection is we think we have a better place to put them. [The plan] would ruin all of the campus atmosphere.”

The manor building Berglund mentioned is the senior center’s Odd Fellows Home, a unique centerpiece of the campus. It was originally built in 1912 to house aging residents by the Independent Order of Odd Fellows, a non-political fraternity that does charity for people in need. The building is currently listed on the city’s Historic Resources Inventory.

If the current proposal goes through, one of the new buildings would be constructed directly in front of the Odd Fellows Home, obscuring the view of the historical manor from passersby and replacing the entrance parking lot. The other remaining two buildings would replace the campus’s bocce ball courts in the Odd Fellows Historical Park and require the removal of over 60 mature trees, 45 of which are classified as “protected,” according to a website created by residents to counter the plan.

SRC executive director Sarah Stel said that out of 37% of the SRC that is currently open space, 31% would still remain open space under the company’s plan.

In addition, she noted that the current plan, which is approved by the SRC’s owners the Odd Fellows Home of California, meets all the financial, environmental and functional criteria needed to move forward with the city’s entitlement process. She also said that everyone agrees with the need for increased amenities and living units to meet the needs of residents.

Despite this, around 10 other residents on the campus voiced concerns during the city’s Nov. 16 Community Information Meeting regarding the proposal’s disregard for the manor, recreation area and trees.

In a survey conducted by the SRC residential council, 60% of residents share this stance and have additional concerns regarding emergency evacuations if the proposed construction were to take place because it would completely block off SRC’s only entrance.

Opposition to the plan is not only limited to seniors living in the retirement home.

“The manor building is likely the single most iconic structure in the city of Saratoga. To take a new building and build it directly in front of it is psychotic,” said Jefferey Schwartz, a neighbor of the SRC, during a Nov. 16 meeting. “Suggesting that you can take down 100-year-old heritage trees and replace them with something of equal value is an insult to people’s intelligence.”

The reason the elderly chose to move to the SRC, Schwartz said, was the beauty, peace and tranquility of the location, and not because they look forward to four to six years of large-scale construction.

To counter the current plan, residents of the SRC, led specifically by a core group of seven individuals including Bardin and Berglund, have been developing and advocating for a viable alternative in the past few years.

In their alternative plan, instead of constructing facilities in front of the manor and on the Historical Park, a larger building housing all 52 independent living units would replace the site’s current Health Center, which residents say is too big for the current people in skilled nursing care.

A new health-care center would then be built where PRS originally planned for its third new residential building, and the PRS’s other two proposed buildings wouldn’t be needed at all. Both plans result in the required 52 independent units, a renovation to the outdated health center, a remodeled fitness space and a new meeting room. The difference is that the residents’ plan would preserve the manor view, the Odd Fellows historical park and most of the trees, Bardin said.

The residents submitted their plan, which is currently under review, to the city in June and have continued to object to the current PRS plan. Despite their opposition, they feel as if they have been left unheard each time they have raised concerns.

“We think the management company has turned a deaf ear to our alternative plans and our thoughts,” Berglund said. “They have not varied their plan at all for the last two to three years, and we don’t believe that we have really been listened to or responded to meaningfully.”

Stel, the executive director, said that the Preserve SRC counterproposal poses several challenges, the biggest being financial risk. Because it requires destroying the existing health care center before building any new revenue-generating residences, the plan could be financially disastrous if market conditions shift.

In contrast, Stel said the current proposal would build the majority of the new residences first, providing revenue to help pay for the rest of the plan.

Another issue Bardin cited is what she called a consistent line of disregard by PRS to holistically and fairly evaluate the campus wildlife that the current plan would destroy.

All the trees classified as sustainability moderate or low, which implies that the trees can be removed, Bardin said, are conveniently the ones that need to be cut down for construction, while the trees classified as healthy do not interfere with the proposed construction whatsoever. The city arborist initially copied the commercial arborist’s report without examining the trees, until Bardin herself questioned the discrepancies to the city arborist during an in-person visit in which the arborist conceded that all the trees are healthy.

“I don’t believe it was a fair evaluation,” Bardin said.

In response to wildlife concerns, Stel said their plan fit the city’s requirements and would plant 240 new trees to replace the 124 trees that would be removed.

Bardin countered that, saying how although the number would increase, the new trees would not compare to the magnitude of the older trees.

To raise awareness about the topic, senior residents have walked door to door in the surrounding streets to garner support from Saratoga residents. They also plan to post notices on NextDoor, follow up with neighbors who strongly support the alternative plan, continue hosting Zoom meetings urging residents to write letters to the city and provide input during a 30-day public scoping period between November and Dec. 22 for the plan’s Environmental Impact Report (EIR).

“We value the quality of life on our campus and we don’t want it to be ruined,” Berglund said. “That’s what it comes down to.”

In order to learn more about the senior residents’ alternative plan, please visit PreserveSRCcampus.org. The city was scheduled to hear an EIR Public Scoping Meeting on Dec. 9 over Zoom regarding the current proposal.