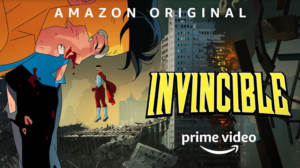 Permalink
With its unabashed use of violence and excellent plot, this Amazon show takes the spot as 2021’s best TV show.

When I watched Amazon Prime Video’s animated series “Invincible” over the summer, I was immediately hooked by its excellent animation and emotional voice-acting.

Adapted from its namesake comic written by Robert Kirkman, “Invincible” starts off like any other coming-of-age superhero story: Mark Grayson, son of Omni-Man, the world’s premiere superhero, suddenly gets his father’s powers and learns how to be a superhero. What sets this show apart from the rest, however, is it’s extreme use of violence.

For example, when Invincible (Grayson’s hero alias) fights the serie’s main antagonist — whose identity I won’t reveal due to spoilers — during the season finale, one scene includes said antagonist holding Invincible in front of an oncoming subway through Invincible’s eyes. Viewers see the visceral killing of hundreds of subway-goers, with their blood and organs spilling all over the screen, just so that the show’s antagonist can prove a point about the pointlessness of human lives. The show also progressively ramps up the violence throughout the season, with the title card shown at the beginning of each episode gradually gaining more blood.

Though some may see the show’s excessive use of violence as unnecessary for a superhero cartoon, I loved how the show showed more realistic implications of someone having super-strength or super-speed. Punching someone wouldn’t just knock them unconscious or even crack their neck; it would literally rip their head off their shoulders.

Besides the realistic violence, the show has great animation, although it’s not as great as other animated shows like Netflix’s “Castlevania.”

The animated series provides a faithful adaptation of the comics — in fact, Kirkman was actually on the team to script the show — but it also adds depth compared to the comics, which was often too fast-paced.

For example, in the comics, we don’t see much of the Guardians of the Globe, the “Invincible” universe’s version of the Justice League, before they are murdered by the serie’s antagonist. Yet, in the animated series, a large portion of the first episode is dedicated to the Guardians. We see their impact on the world — for example, saving the White House — as well as their normal lives outside of their superhero personas, and this little detail makes their death so much more impactful than it was in the comics.

I also enjoyed how this series was animated instead of live-action. Many of the “Invincible” fight scenes are extremely over-the-top, and it’s simply difficult and expensive to portray these types of scenes well in live-action media. Because “Invincible” is animated, the show’s able to include huge battles in almost every episode without blowing through mountains of cash.

A show that I think falls prey to this is “The Boys,” released on Amazon Prime in July 2019, because some episodes just felt dull without the large fights that I’ve come to expect from superhero media. Some live-action TV shows actually are able to pull this off, such as Marvel’s phase four shows, but those had much larger budgets than most studios are able to afford; some Marvel phase four shows, including “Loki” and “The Falcon and the Winter Soldier” had reported budgets of over $25 million per episode. So, seeing as how “Invincible” was a huge success, I hope that more future, mainstream superhero media can be made through animation.

The show also feels realistic compared to other superhero works — the government is actually competent and doesn’t totally rely on supernaturals to save the world. Additionally, characters are written believably, and no one overreacts simply for the sake of adding drama to the show.

“Invincible” stands out for its excellent plot and its intriguing twist villain. Twist villains are dramatically ironic characters with motives that aren’t necessarily meant to be a surprise to the audience but rather meant to surprise the characters. Shakespeare does this well in many of his plays, where audience members know of a character’s deception and thus feel scared for the victim whenever they have screen time.

If you’re already hooked on watching the show, I’d stop reading here and start watching on Amazon Prime Video to find out who the twist villain is for yourself. Otherwise, here we go:

“Invincible” reveals the villain to be Omni-Man, Grayson’s father, in the very first episode, when most, if not all other characters still think of him as a powerful, benevolent hero. The show leaves audience members hanging for his underlying motives until the season finale.

While I was watching, I truly felt scared for the characters in the show, especially Omni-Man’s wife, who was conducting her own investigation on who killed the Guardians of the Globe. When she finally confronts Omni-Man about the murders, I truly had no idea of whether she would live or not — if you haven’t watched the show, you’ll just have to see for yourself.

I’m excited for the next season to air, even though I’ve already spoiled the entire plot for myself by reading the comics. And since the show is animated, hopefully, it won’t have any production delays due to the pandemic.