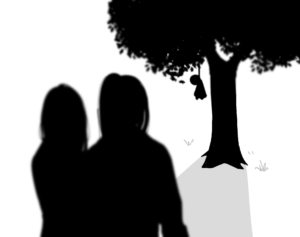 Photo by Leyna Chan
A Black doll was found hanging from a noose in the main quad on the morning of Nov. 13.

Permalink
The school’s diverse Asian American population can no longer serve as a mask for other underlying prejudices.

Our school is diverse by national standards: We have a large Asian American population of 58.7%, covering a vast number of cultures and identities. Our diversity tends to indicate that we have an accepting community of varying backgrounds.

So, when superintendent Bill Sanderson recently revealed to families that a Black doll was hanged by a noose in the middle of the main quad — a clear act of hate and racism — the most common reaction was shock: Here? Racism? In Saratoga?

Regardless of whether the perpetrator was a Saratoga High student or not, this incident is a reminder that our school is far from anti-racist. In fact, there is too often quiet racism on campus from students against communities vastly underrepresented in our student body, unable to defend themselves even if they wished. These prejudices make our campus less safe and less welcome and we need to finally tackle it.

Yes, in our quiet school — as well as Redwood Middle and Prospect High — a disturbing act of racism was displayed in the middle of the student communal area. But this kind of racism, especially against Black and Latino communities, has long existed at our school.

Take a stroll through the library during tutorial — you’ll hear students   using the n-word casually and sometimes even making racist jokes. At football games, students make snide remarks about opposing players’ haircuts, girlfriends and more. It might not be painfully obvious, but these comments regularly target Latinos and Blacks.

This racism is quieter, but said in safer spaces and not publicly acknowledged. Sadly, it still happens regularly in every grade and in nearly every friend group (though mostly among boys, to be fair). And it’s more than “simply a joke” — the majority of these jokes are ill-intentioned.

These are the most common examples, but there’s plenty more, often coded into subtle microaggressions and closed-door conversations. As diverse as the school is, Black and Latino students are severely underrepresented here — and too many students comfortably throw punches at others of these backgrounds, knowing that no punch will come back.

Our community has simply chosen to ignore this, hiding behind our own diversity, problematically refusing to acknowledge this hidden racism. Instead of engaging these issues together, we direct students into closed spaces with a counselor or therapist. Or we have vague discussions on “positive community norms” like respect.

But now, with the shock of an abhorrently racist event in the middle of our campus, is the time to change that. This is not just a time to react strongly against racism and bring perpetrators to justice for their hate crimes. This is a time to reflect, as a community, on our prejudices and biases and to have explicit conversations in MOSAIC and everyday classes to combat these prejudices.

A Black doll hanging on a noose is a hate crime, one that belongs nowhere near our campus. It’s also a reminder of our student body’s inaction against Black and Latino racism and a chance to begin real change.