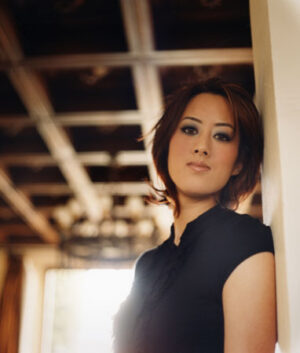 In today's society, simply wanting to be an entertainer is not enough; aside from being talented, getting noticed takes a lot of effort too. One such persevering entertainer is Saratoga High alumni and singer Vienna Teng, the stage name for 1996 graduate Cynthia Shih.

She sings from four main genres: folk, pop, indie folk and chamber pop. Since her debut in 2002 she has produced four albums, including "Waking Hour" and "Warm Strangers", which once reached No. 2 on Amazon.com's bestseller list.

In today’s society, simply wanting to be an entertainer is not enough; aside from being talented, getting noticed takes a lot of effort too. One such persevering entertainer is Saratoga High alumni and singer Vienna Teng, the stage name for 1996 graduate Cynthia Shih.

She sings from four main genres: folk, pop, indie folk and chamber pop. Since her debut in 2002 she has produced four albums, including “Waking Hour” and “Warm Strangers”, which once reached No. 2 on Amazon.com’s bestseller list.

“It [music] was my first love, I think,” said Teng. “My parents tell me I was always singing as a toddler.”

She continued to nurture this love in her high school years with the piano.

“I found the piano endlessly fascinating,” she said. “Through high school and college, I’d play and write songs as an escape from everything else, and as a way of working out my understanding of the world.”

In addition to playing piano, Teng joined Stanford’s a capella team, Harmonics. She also pursued her interest in music when she began to record her own compositions at Stanford, planning to distribute her recordings on campus.

Teng didn’t always want to be a singer, though. She studied computer science at Stanford and worked for Cisco Systems as a software engineer before pursuing music. In addition, her original dream had been to write scores for movies and compose orchestral works and she trained accordingly.

“I studied classical piano (and a bit of jazz/composition) in high school and college, but didn’t attend music school or major in music,” said Teng. “Most of my real training came from playing gigs in coffeehouses.”

Teng managed to get these gigs through perseverance and hard work. All her gigs came from open mics, nights where she signed up to play a song. She also sent demo CDs to coffeehouses but received little response.

“I’d sign up to play one song, and sometimes I’d get invited back the next week to play a longer set,” said Teng. “On the basis of those sets, I’d get offered a weekly slot, or someone who ran a house concert series would offer to host me, and so on. I tried dropping off demo CDs at coffeehouses and making follow-up phone calls, but I didn’t get a single show that way.”

Teng’s path to fame wasn’t completely smooth either. Though her parents supported her, they still had doubts about the stability of a music-oriented career. Teng was rejected many times; her phone calls were unreturned, her demo tapes were spurned and her performances were more often that not given to sparse, uninterested crowds. However, Teng maintained a postive attitude, saying that “it’s the ‘yes’ in a pile of ‘no’ answers that matters.”

Teng continued to pursue her musical career and signed on with Virt Records in 2002, which was a big jump for her.

“It was exciting, but also felt like a gamble. We were two unknowns, a new independent label and a recent open-mic graduate, trying to make something happen together. Fortunately, it paid off for both of us,” said Teng.

Because of her music, Teng has also appeared on many shows such as The Late Show with David Letterman, the CBS Saturday Early show, and CNN’s NewsNight with Aaron Brown. Though she has had so much exposure, performing is still a different experience every time.

“Every night is a little different,” said Teng. “Sometimes I’m nervous and it’s like a piano recital—I’m just praying to get through it without messing up or saying anything stupid. Sometimes we play well but don’t fully connect with the audience. Sometimes the performance is sloppy but everybody has a good time. And once in a while everything falls into place and we get something transcendent. Live music can be both entertainment and spiritual practice at once, and I’m always trying to get the whole room to experience that.”

Not only does Teng love the musical opportunities that her profession brings, she also enjoys the experiences that come along.

“[The most interesting part of my job is] meeting people with a wide variety of careers, interests and life stories, and having a starting-point for conversation—if a song of mine has connected with them, we already know we have something in common,” said Teng.

Many singers change professions when they become too old to sing, since their voices may become weak over time. Teng plans to continue singing for as long as she can, but might also consider a switch in her career.

“I’m interested in other fields as well—sustainable enterprise and technology in particular—so I might make a career switch at some point,” said Teng. “But creating and playing music will always be part of my life.”

“Do whatever keeps you in love with music—whether it’s devoting your life to it, or keeping it a ‘hobby’ so you never have to rely on it to pay the bills,” said Teng. “Find like-minded musicians; learn from and support each other. Do things that scare you a bit. Dare to ask for help from people you admire. Feed the other parts of your brain. It’ll make your music better.”