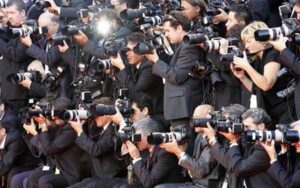 Permalink
The paparazzis’ intentions and existence of probable cause should be the deciding factor in determining the legality of their actions.

In 1997, Princess Diana’s driver sped away from an onslaught of paparazzi vehicles, eventually crashing the car and killing everyone in the car but her bodyguard.

In 2009, Italy’s self-described “King of Paparazzi” Fabrizio Corona was imprisoned for blackmailing several high-profile Italian celebrities by taking unflattering photos of them and “selling” them to the targets before the press could publish them.

Bands of photographers and sensationalists embed themselves in the personal lives of the famous, hoping to snatch the compromising photo that will earn them praise and pay from tabloid magazines and shows. Celebrities such as Justin Bieber, Kylie Jenner and Mariah Carey have lashed out at the paparazzis following them, but are often criticized for doing so.

Fundamentally, the issue regarding paparazzi regulation involves trying to balance First Amendment rights while protecting the privacy of individuals. While the First Amendment grants photographers and journalists the ability to publish the photos they take, there are limitations on their behavior such as slander and libel, as well as the fundamental privacy rights of others.

There are many instances in which people are prohibited from taking photos whenever they want: At police crime scenes, for example, such photos could interfere with the accused’s ability to undergo a fair, speedy trial; at a public restroom, taking photos is a violation of basic privacy and could likely result in legal consequences.

Current paparazzi laws maintain a stance similar to that of slander and libel — as long as it is not affecting celebrities directly by representing them falsely in a bad light, publishers can continue to print tabloids full of details about the intricacies of the private lives of the famous.

While these laws are highly important in order to ensure that celebrities’ reputations are not damaged by maligned comments and pictures, the focus should be on the intent of the paparazzi rather than just the effect of their actions. Keeping this in mind, there should be three additional regulations on paparazzi to ensure that the celebrities lead relatively normal lives.

First, there should be laws punishing paparazzi who are continually invading celebrities’ privacy in the hopes of taking a compromising photo that they can later publish in the press or use as blackmail.

It is unreasonable to expect any celebrity to constantly keep their guard up around a group of  bloody-hungry, profiteering and uninvited people. It is human nature to eventually make a minor mistake, but this is compounded when that mistake is distributed across the press or recorded in a compromising manner. Staying alert and professional, even in the supposedly private comfort of home, is a highly stressful and unreasonable burden to place on famous people.

Additionally, paparazzi with the intention to capture images of minors should be strictly prohibited and punishable by law. Minors do not have the ability to evade and confront photographers. As a result, they generally have to rely on their parents to shield them from public exposure. It is unethical to create an environment where the public invades the privacy of young children, regardless of who their parents are. As such, this should be prohibited by law.

Finally, there should also be additional enforcement of existing and potential laws regarding paparazzis. Without stringent enforcement, the celebrities themselves are forced to take their privacy into their own hands and lash out at them, slapping, punching, and beating them. Whether or not this is justified, it is indisputable that it is the responsibility of the justice system and law enforcement should be taking care of this and protecting the rights of the famous.

Furthermore, as the frequency of celebrities showing up in newspapers or tabloids increases, their fame skyrockets along with these appearances. This exacerbates  their public exposure, and leads down a slippery slope where celebrities end up losing more privacy. By increasing enforcement, such as convicting more intruding paparazzi and increasing the penalties for behavior that crosses boundaries, the influence of the paparazzi can be contained.

Despite these three additional laws, however, there should still be room for the First Amendment. When the famous engage in serious wrongdoing, it is all the more newsworthy and important to inform audiences about.

There is a fine line between legal investigative journalism, and invading the privacy of the individual for human and profit interests. This makes setting laws to distinguish between them relatively difficult.

Though it may be difficult to ascertain definitively, one prime difference between these scenarios is that of intent. The investigative journalist wishes to seek out wrongdoing for the general good of society, whereas the paparazzi wish to publish compromising and possibly inaccurate information about a celebrity.

One of the most effective ways that intent can be measured is the notion of probable cause. Law enforcement requires a reasonable threshold of evidence to proceed with an investigation or arrest; civilians who are prying and investigating the lives of others should be held to the same standards.

Most professional journalists investigate politicians and other high-profile people only when it is suspected through witnesses, victims, leaked reports or insider information that the individual has committed a crime or any other act that would interfere with their being able to do their job ethically. The journalists’ mission is to release this information to the general public via their photos and stories.

Most paparazzi, on the other hand, have less than noble public service goals. Instead of relying on factual evidence, they rely on using random chance to find a compromising photo or instance. This makes their investigation fundamentally different and not central to the role of the press in a democracy .

The current paparazzi laws can be bolstered by additional laws that prevent continual monitoring of celebrities, prevent the paparazzi of young children and regulate the publishers of such material. To decide what constitutes paparazzi and what does not, lawmakers should look primarily at intent and convict those who take photos solely for embarrassing the famous for profit, rather than furthering democracy.