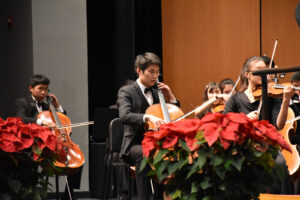 Saratoga Strings performed a kickoff concert on Dec. 10 before heading off to Chicago for a prestigious music festival.

While it’s safe to say most students are stressing about finals or dreaming about winter break, the 42 members of Saratoga Strings, the school’s top orchestra, will be on a plane next week to Chicago and performing at The MidWest Clinic — a prestigious conference centered around band and orchestra concerts.

From Dec. 19-Dec. 22, Saratoga Strings will perform a repertoire totaling 75 minutes of music. Approximately 18,000 educators, students and industry members from all over the globe will be attend the clinic.

Last spring, as part of the auditioning process, the orchestra created six recordings in hopes of being one of 300  groups chosen from around the U.S.

Director Michael Boitz said he was pleasantly surprised when he found out that the school had been selected.

“We’ve performed at the Midwest Clinic once in the past, and it seemed like a once-in-a-lifetime experience,” Boitz said. “I didn’t think we would be fortunate to get this opportunity again.”

The music department directors wanted to showcase the abilities of various students and their unique skills. For instance, some individuals are featured in parts of the music on unconventional orchestral instruments, such as senior Dermot Gleeson on acoustic guitar and senior Andrew Gao on piano. Due to the multiple pieces of music, the ensemble has six different seating charts.

“I’m really grateful that Mr. Boitz wanted to feature me,” Gleeson said. “I feel especially lucky that he’s willing to put it in the program for such a big event.”However, Boitz noted that this number of performers leads to the concern of running over the performance time limit, since there is  only a set amount of time for each performing group.

In addition to this worry, some students were concerned about the need to take finals early.

“Checking in with each teacher to set up a schedule has been a bit of a hassle,” said junior Alvin Liu, who plays violin. “I also have to study more in advance so I can be ready for a more crammed finals schedule than usual, but nonetheless, I’m excited for the trip.”

Boitz hopes to do a trip of this magnitude again in the future. “This is a spectacular group full of amazing musicians, and I’m sure we can do anything we put our minds to,” he said.