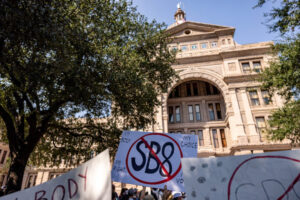 Photo by The New Yorker

Permalink
The Supreme Court hasn’t helped women by siding with the Texas law so far.

On Sept. 1, the Texas state legislature signed Senate Bill 8 (SB8) into effect, implementing one of the nation’s most restrictive abortion bans up to date.

The law bans abortions as soon as fetus cardiac activity is detectable (at six weeks of pregnancy), which is well before many women even know they are pregnant — especially if they have an irregular menstruation cycle.

This ban doesn’t provide exceptions for rape and incest and allows one to sue anybody suspected of helping a pregnant woman seeking an abortion, regardless of geographical location in the U.S.

Regardless of one’s stance, the passage of this law is concerning; not only has SB8 sewn immense political divisiveness, some experts argue that it may be the first step in a slippery slope of politicians encroaching on citizen bodily autonomy.

The consequences are especially dire for Texan women of color, Texans who are undocumented, financially unstable and unable to travel. While some women are circumventing the law by traveling out of state for an abortion, those who cannot are left with no safe choices. With no safe access to abortion, she may resort to unsafe alternatives such as sticking a clothes hanger up or flushing the uterus with beach, which results in several health risks and possible death.

While the pro-life movement opposes abortion, saying that everyone has a “right to life,” it would be a lot easier to take their argument seriously if they were also strong supporters of universal healthcare, easy access to contraceptives and sex education, more child tax credit to eliminate child poverty and better child care. If the movement fought equally as hard for all stages of life, it would have more meaning. Instead, the pro-life movement and anti-abortion supporters aim to strip women’s right to make choices about their own bodies and lives.

Historically when states have passed laws restricting abortion such as the Partial-Birth law,  lawsuits against the state legislature are filed by advocacy and civil rights groups such as Whole Women’s Health, requesting an injunction against the government officials that would be reviewing the process. Then, a judge of a lower appellate court, or sometimes the Supreme Court, can choose to either grant the injunction or block the law from being enforced until the controversies of the law have been debated and sorted out.

In this case, the SB8 challenge was filed against the judges of the presiding cases by several pro-choice advocacy groups, but the Supreme Court majority claimed that the judges were the wrong people to file an injunction against. Because of this, the court didn’t grant an order blocking the law from being enforced several weeks ago despite all the constitutional controversies.

Due to Roe v Wade, the 1973 Supreme Court decision that protects a woman’s right to an abortion without excessive governmental restrictions, the creators of the new bill had to find a way to prohibit abortions without the government stepping in, thus choosing to utilize vigilante-style enforcement. Because of the clear prohibition of government interference, the Supreme Court voted in a 5-4 majority to allow implementation of the law, deciding not to take any action on the Texas legislation before it was fully examined and effectively criminalizing abortion in the state.

In the case of the new Texas anti-abortion law, however, there was no specific person or agency that enforced it. SB8 calls for vigilante-style enforcement — the legislation gives Texans that don’t work in the government the power to file civil suits against peers, acquaintances, or family suspected of having an abortion for a minimum of $10,000 if they either had or assisted in an abortion.

This enforcement is chaotic and makes it difficult to know who to file an injunction against. Furthermore, the legislature is making it difficult for federal courts to enjoin the act, which is an effective assault on the Constitution.

Texas Right to Life, an extremist right-wing organization, has set up what it calls a “whistleblower” website that urges people to submit anonymous tips about anyone possibly violating the law. In response, many TikTokers have been urging people to send in fake tips to overload the website.

If the challenge on abortion wasn’t stopped at the Supreme Court, where do the duplication of citizens and their constitutional rights stop? Not only are abortion laws stripping women of making their own decisions over their own bodies, but more concerningly, without the Supreme Court following precedent, women in the U.S. could soon see the protections of Roe v. Wade disappear.

The Texas legislation provides other state legislatures a roadmap on how to sidestep the Constitution, and not just regarding abortion. If successfully implemented, the law could potentially set off a string of legislation that circumvents Supreme Court rulings through employing vigilante citizen enforcement in neighboring states. If the federal courts ultimately allow this law to stand, it’s very likely that other conservative states will move to pass similar laws.

In fact, Florida State Representative Webster Barnaby has proposed a ban on abortion, mirroring the Texas law. Though the bill has yet to be put into place, many representatives and legislators are looking to implement something similar in the near future.

Women know what’s best for their own bodies and lives. SB8 calls for putting conservative beliefs above the safety and freedom of pregnant women. If nothing else, the logistics of the law violate the spirit of the Constitution and should be soundly rejected by the courts.