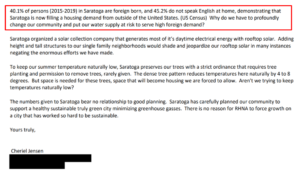 Jensen penned a public email on Aug. 30 blaming the 40.1 percent of foreigners in Saratoga for wasting the city’s water supply.

Permalink
Controversial statement was made in an email about increasing housing density in the city.

In a public email written on Aug. 30, Cheriel Jensen, a  member of the Saratoga Planning Commission, expressed opposition to the Regional Housing Needs Allocation’s (RHNA) appeal to install 1,700 plus housing units in the city by 2023.

She wrote, “40.1 percent of persons (2015‐19) in Saratoga are foreign born, and 45.2 percent do not speak English at home, demonstrating that Saratoga is now filling a housing demand from outside of the United States. Why do we have to profoundly change our community and put our water supply at risk to serve high foreign demand?”

The backlash from the community for perceived xenophobia was swift and she resigned from the commission after mayor Yan Zhao asked her to do so.

Her resignation took effect on Sept. 14. Jensen issued an apology that has not yet been made publicly available. The Falcon contacted Jensen for her comments on the situation, but she did not respond.

In addition to issuing a public condemnation of Jensen’s letter during the Sept. 15 city council meeting, the council also plans to hold a study session with all the commissions in October to reflect on “[Saratoga’s] Code of Ethics, Values and Mission.”

Several Saratoga residents, including LGSUHSD board member Cynthia Chang, expressed their disappointment at the comments and speed of the council’s response.

“[Jensen’s concerns] reflect a xenophobic and racist perspective that is out of touch with our diverse Saratoga community,” Chang said at the Sept. 15 city council meeting. “I was disappointed to learn of the silence and inaction on the part of the city council to [her] statement.”

In addition to Chang, LGSUHSD board members Katherine Tseng and David Guidry also expressed disappointment in Jensen’s letter during the public comments section of the board meeting.

Although Guidry said Jensen should not continue to serve as a member of the Planning Commission, he said he is proud of the growth and changes in Saratoga since he moved here in 1973.

“We consider our cultural diversity as one of the strengths of our community,” Guidry said in an interview with The Falcon. “It’s great that we keep bringing in new cultures and people who have different views that give our students a chance to learn the way the rest of the world thinks.”

For her part, senior Noora Fayad said xenophobia in the Saratoga community is still prevalent.

When Fayad learned about Jensen’s public letter, she was angry — but not surprised.

For Fayad, a first-generation American from Palestine and Lebanon, being called “terrorist” and “n-word” is normal.

“I’m so numb to xenophobia and racism in general, it’s expected,” Fayad said. “If someone doesn’t say something xenophobic, I’m like ‘wow, that’s amazing.’”

Even so, Fayad was upset that Jensen focused on blaming Saratoga residents rather than focusing on fixing issues such as low water supply due to the state’s droughts.

Instead of “scapegoating immigrants for using the water supply readily available to everyone, not just people of color,” Jensen should take action to combat climate change, Fayad said.

While Fayad appreciates the city council’s scheduled study session and Zhao’s request for Jensen’s resignation, she said there should be a system that ensures a higher standard for public officials — that they should be working for all the people in the community no matter their nationality, ethnicity, identity or gender identity.

“There shouldn’t be someone in power who is working against a vast majority of Americans,” Fayad said. “We, as immigrants, live in Saratoga. We pay taxes here, we support local businesses here. We built this country from the bottom up; we are the people who go into houses and clean them, people who do the work that a lot of people don’t want to because we came here in hopes for a better life.”

Fayad said it’s important to recognize the amount of xenophobia in the community. Oftentimes, she said people with racist perspectives try to defend themselves rather than working on change.

While some like Fayad were upset by Jensen’s comments, others had sympathy for someone they say is a good person who made a regrettable mistake. In the city council meeting, Jeffrey Schwartz, who has been Jensen’s friend for 40 years, said that although he does not condone her remarks, he accepts her apology.

“Those two offensive sentences are not Cheriel; she is not a racist,” said Schwartz, previous vice president of the Board of  The Women’s Housing Connection, the only homeless shelter in Santa Clara County for women. “She is a kind and considerate person with a good heart who has always supported diversity in our community.”

Like Guidry, Schwartz said that many have embraced the increasing diversity compared to the majority white population from when he first moved here years ago.

“Some communities have had serious conflict with changing demographics, and increasing minority representation,” Schwartz said. “No community is perfect or free from all bigotry. And we’re certainly not. But Saratoga has been, and I am certain will continue to be, welcoming for all peoples. I hope that is not lost in this discussion.”