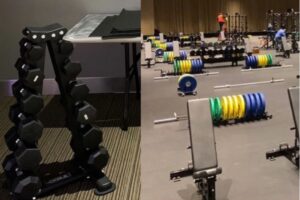 The disparity between the resources given to the men's and women’s basketball teams during the tournament was put on full display in University of Oregon sophomore Sedona Prince’s viral TikTok post. In the video, Prince said the NCAA tried to justify this inequality due to space issues — then panned over to an area devoid of weights and other equipment.

This fiasco is just one of many examples of inequalities between the treatment of men and women in sports, such as the enormous pay difference noted in the 2019 World Cup for the members of American women’s and men’s teams. Although recent movements have attempted to bridge this gap, the frequency of such contrasts between events proves that much work remains to be done.

In order to ensure gender equality in sports, the public must do more to demand equality, and change the stereotype that men’s sports are superior.Perhaps the most salient example of this inequality is in the gender wage gap.

On average, a professional women’s basketball player earned just over $100,000 in 2019, while the average NBA player earned almost $7 million, according to Fox business. The WNBA average salary has increased about $30,000 since 2019, but this  doesn’t justify the fact that the average NBA player makes about 70 times the amount an average WNBA player does. This disparity in pay is primarily caused by the lack of support for the WNBA as a whole. In the 2020 season, the NBA generated around $7.4 billion in profit compared to the WNBA’s $60 million.

This problem could be solved if viewership for the WNBA increased and if longtime NBA fans start showing support for the WNBA as well. Since its establishment in 1996, the WNBA league has been operating at an average loss of $10 million a year, with only half of the teams generating profit in 2016. In order to increase pay for its athletes, the WNBA must first find a method to increase its viewership, which will lead to other areas of revenue such as jersey sales and sponsorships.

To distinguish itself from the NBA — which excels in some of the most exciting aspects of basketball, like dunks and three pointers — the WNBA  could possibly shift its own play to become more team-oriented, rather than star-oriented like the NBA. However, this would require the implementation of new regulations to ensure that team play is successful. This new style of play would center around passing and playmaking, differentiating itself from the isolation plays in which many star NBA players specialize.

Another avenue the WNBA could take is attempting to bring the flashy moves of the NBA to its own league. This would require lowering the basketball hoop — traditionally 10 feet — to 9 feet to allow for more dunks, as well as moving up the 3 point line. There have been only 22 instances of a WNBA player dunking in its history, which will surely increase if the rim were lower.

The issue of unequal pay has been addressed many times in interviews and podcasts by star WNBA players such as Sue Bird and Brittney Griner, yet little has changed. Certain NBA players like Kevin Durant have also expressed their support for the WNBA, but the viewership for WNBA games has not seen a noticeable increase in the past years.

Perhaps a solution to solve the wage gap problem in sports more generally would be to walk in the footsteps of Billie Jean King, a tennis icon who made huge progress for gender equality in her sport. By threatening to boycott the US Open in 1973, she was able to secure equal pay for the winners in both the men and women’s bracket. The effects of King’s stand can be seen today: women’s tennis, which has produced icons such as Serena Williams, has been the most progressive sport in achieving gender equality in pay and viewership.

If the WNBA continues to see unjust pay differences, it may be wise to take a stand by boycotting their games with the help of celebrities as well as their NBA counterparts. If enough attention is drawn to these acts to boost viewership, the wage gap could very well decrease dramatically.

Although the road to equal pay and respect in sports may seem far off, the potential for progress has already been realized in several sports. If public support continues to grow for gender equality, then there is a high possibility for sports to become more fair for both genders.