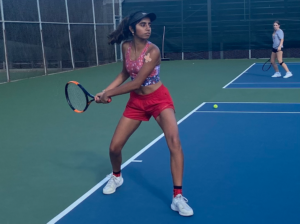 Photo by Anamika Anand
Senior captain Arshi Chawla prepares to return a serve during a practice on Sept. 19.

Permalink
With more strong freshman players this year, the team looks forward to a promising season in the less competitive El Camino league.

Recap: Lacking players and suffering from low morale against strong opponents, the team finished last place out of seven teams in the De Anza division.

Key Matchups: Marica says no team stands out in the league yet

After falling to the bottom of the upper league, the team is looking to improve for their upcoming season. Due to their winless record last year, the team dropped from the De Anza league to the El Camino league — a disappointing result for the program after a long history of CCS qualifications as well as several championships from 2009 to 2018.

The team has played three matches, losing to Los Gatos 6-1 on Sept. 13 but winning against Fremont 6-1 on Sept. 15 and solidifying their comeback with a decisive 7-0 win against Santa Clara on Sept. 20.

Senior captain Arshi Chawla is optimistic for the season as an unusually high number of strong freshmen have tried out and made varsity.

“It’s good that a lot of freshmen are trying out,” Chawla said. “When they’re seniors, they’ll obviously be better and it shows a promising future.”

“The extra experience helps for playing matches because you know what to do in certain situations,” Manea said.

While varsity is looking strong, the JV team still needs a new coach. In addition, current low enrollment of only 8 girls on JV will cause one automatic forfeit every match.

The varsity team is hoping to boost team morale and consistency — two of the biggest problems they faced last season. According to Chawla, a collective lack of team morale contributed to last season’s defeats. In order to improve team spirit, she plans to make practices more fun and enthusiastic, from playing music from a speaker to rekindling the tradition of having a season-end team dinner.

Another major issue last season was the inconsistency of players’ games and fluctuating doubles pairings, which at times became confusing for players. As such, Chawla wants to focus on creating a predictable lineup, ensuring that everyone can be in the same position and play with the same doubles partner each time, making only minor changes after. By doing so, pairs can develop better coordination with each other.

With these adjustments, Chawla hopes the team can win the lower league title and vault back to the De Anza division.

“It’s been going really well,” she said. “There’s a lot of girls this year who want to play, and we’re excited for major improvement this season.”