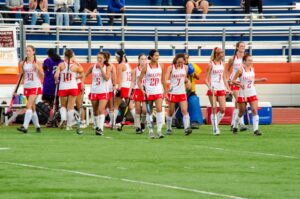 At the beginning of the game against Homestead, the field hockey team runs onto the field.

As the buzzer rang at the end of the intense fourth quarter of their first CCS game on Nov. 1 against San Benito High School, field hockey co-captain and left center back senior Olivia Kinoshita glanced at the scoreboard: 0-0. The score remained stagnant continuing into double overtime as the two teams struggled in a back-and-forth bout — the normal 48-minute field hockey game extending to an exhausting 68 minutes.

After junior forward Kayla Steele scored during the final shootout, the rest of the team ran onto the field to celebrate the victory.

“I would definitely say it was the highlight of my season,” said Steele.

The field hockey team made it into CCS championships on Oct. 27 after a 4-0 win against Palo Alto. On Nov. 1 they played their first round against San Benito and won 3-0 behind Steele, Kinoshita and senior center mid Lauren Yarrington’s three goals, as well as senior goalie and co-captain Nandini Desai’s masterclass defense. The team’s victory over San Benito followed an already successful season; the Falcons finished first in the El Camino League with a record of 9-1.

The team closed their season with a heartbreaking 2-1 loss against Leigh on Nov. 3, ending their CCS run.

“Sometimes we check out of the game when we’re just a little defeated,” said sophomore defense player Zinneerah Ahmed. “Making sure to bring that intensity and energy is important to do.”

Despite the loss, members of the team were proud to represent the school as the only fall sport to qualify for CCS this year.

“My sister advanced to CCS in 2017 and her year was the most recent year we went [prior to this season], so it’s cool that I got to go too because there was a lot of pressure,” Kinoshita said.

Near the end of the season in the game against Homestead on Oct. 30, Kinoshita said the team started playing together.

“The ideas our coach had been trying to drill in us for the past four years, at least for the seniors, clicked,” she said. “It’s really cool to be able to play where you’re not holding the ball as much and you’re passing a lot more; it made us feel more like a team.”

This bond and connection among players was welcoming to the new sophomore players who joined varsity as well.

“The team’s encouragement towards one another and our extremely close bond helped in making this season as successful as possible,” Ahmed said.

Following their accomplished season, the team has high expectations for next year. Despite the loss of eight current senior athletes to graduation, Ahmed is confident the team will continue to carry out their success.

“It’ll be exciting to see how it will be without the eight other people,” Ahmed said.

Kinoshita was surprised by the new underclassmen players’ potential and how they were able to meet the same level as the older girls on the field.

“It was awesome to be able to watch them grow as they are valuable assets for our team in coming seasons,” Kinoshita said.