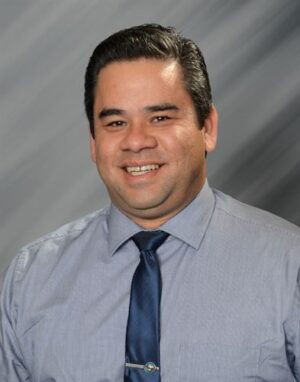 Greg Louie meets students and teachers in preparation for starting work on July 1.

On the morning of April 23, Greg Louie stood around a table with about 20 teachers who had come to the staff lounge to meet with the newly selected principal before beginning their first-period classes. Later that day, Louie walked around campus,  talking with staff and students in the quad during tutorial and touring campus facilities like the McAfee Center, music building and MAP annex.

“My experience with students has been awesome,” Louie said. “Honestly, my cheeks hurt because I’ve been smiling so much. I’ve never experienced that before, where I feel like I'm getting a cheek cramp.”

The district board approved Louie’s selection at their regular meeting on April 23 and he will officially begin his job on July 1.

The application process included an essay, three days of interviews, four panel interviews, a performance task, a visual presentation and a team that shadowed him in his current position as principal of Santa Teresa High School.

Louie, who grew up in San Jose, attended Silver Creek High School and went on to earn a bachelor’s degree at the University of California, Davis. He has worked at Santa Teresa High School for 15 years.

Although Louie looks forward to his new position, he said he did not expect this sudden change after 15 years of service at Santa Teresa.

“My family is very excited and supportive,” Louie said. “We thought our daughter, who’s currently in the seventh grade, would graduate from Santa Teresa, but now she’s flirting with the idea of coming here for high school.”

As an undergraduate, Louie began as an animal science major and wanted to be a veterinarian but his interests changed while he was there, and he decided to major in English with an emphasis on creative writing.

Louie said that he never expected to become a teacher, thinking he wanted to enter a career in journalism or another profession involving writing. However, after teaching classes at UC Davis for a couple of years, he fell in love with it and contacted the former activities director at Silver Creek, who offered him a job as an English teacher.

There, he also coached football, and later moved to Santa Teresa High School, where he started .

At Santa Teresa, Louie served as the administrator in charge of discipline, then switched over to assistant principal in charge of education. In 2012, Louie was appointed principal.

He said his experience has allowed him to work in varied situations — doing the inspiring work of teaching and opening minds in classrooms but also providing discipline and guidance to kids who have broken rules such as abusing substances r.

Louie said he will be visiting campus occasionally until the end of the year to ensure a smooth transition into next year. He said his goal is to develop relationships with staff and students within his first 90 days at the school.

“You have a phenomenal school, so my job is to support you to where want to go and support the teachers in what they do,” he said.

Later, one of his priorities will be to “ensure that the instructional practices for students is relevant” in order to help reduce student stress.

So far, Louie sees many parallels between Saratoga and Santa Teresa, such as CASSY, which is called the Student Family Center at Santa Teresa, and the Media Arts Program, which he said is “on steroids” compared to Santa Teresa’s multimedia program. The major difference he has noticed is that Saratoga’s facilities and programs are more developed.

Louie, who first met Robinson five years ago, said that he is honored to follow a “mentor, resource, and overall a great guy.”

“I’m so honored to continue his legacy and build on all the great things he’s done and make him proud of me following him,” Louie said. “I have some huge shoes to fill.”