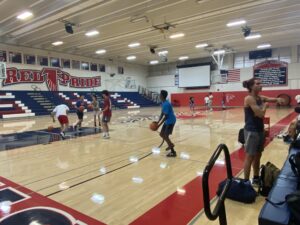 With the school basketball season approaching rapidly, longtime history teacher Mike Davey has accepted the job of coaching the boys’ varsity team — a position he also held from 1992 to 2006.

After previous varsity head coach Patrick Judge and JV head coach Devin Southerland both left the program in the off season, the team had significant coaching vacancies to fill.

Athletic director Rick Ellis described the departure as a mutual understanding and said Judge “decided to go his own way” and that “after seven years in a program, it was time to part ways.”

Although players were surprised by the change, most are making the best of it by staying committed to working hard in preseason workouts under Davey’s direction.

Senior varsity captain Niveydh Pai said Davey, who has been a teacher at the school for 30 years, has already established a strict regimen with open gyms after every Blue Day. He believes the open gym is great for their team chemistry, something the team was unsure they could build before the season started.

According to Pai, it is essential for the team to be working in the off-season, especially since the team moved from the B-league to the A-league this year and will be facing tougher opponents.

Davey’s style of coaching is different from Judge’s in that he is much more defense-oriented — as a result, the veterans are still adjusting away from last year’s offense-oriented game plans.

“He has been keeping the intensity very high,” Pai said. “Everyone is appreciative of [Davey] taking us to lift and run to get ready for the A-league.”

One of Davey’s main philosophies is organization. Instead of letting players play an unstructured style during games, he said he expects them to run multiple different plays for different situations. Davey’s new playbook consists of 54 plays, a significant increase from previous years.

“It’s kind of like a fire drill,” Davey said. “We’re gonna have to put a whole new system in plays on offense and defense.”

On the offensive end, Davey is making adjustments to have power forwards and centers play more in the paint in contrast to the old system of driving to the paint and moving the ball around for open 3-point shots.

Besides having a successful run as the boys’ coach years ago,  Davey coached the girls’ varsity basketball team starting in 2008 and established stability in the then-shaky program, leading them to winning seasons and CCS success before he eventually stepped down in 2017.

Growing up, Davey accompanied his father and attended dozens of basketball camps, including going to yearly camps in Montana.

Davey’s father was inducted into the Santa Clara Broncos Hall of Fame in 2016 after a 15-year career coaching the team. The Falcons will face a challenging preseason schedule, but he believes that there are many talented players on the roster and each is willing to play hard. With the move to the highly competitive De Anza division, Davey said he is prepared to get the best out of the team by Oct. 31, when the winter sports season starts.

“Davey has 30 years of coaching experience so I’m happy that he’s our replacement,” junior forward Kali Duvvuri said. “It’s hard to find a replacement this late into the year, but we got a good coach.”