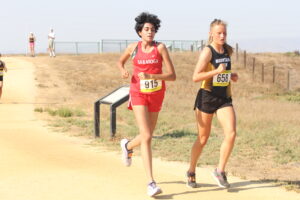 Photo by SHS Talisman
Senior Amoli Vanavadiya overtakes her competitor at a meet.

The first thing senior Amoli Vanavadiya did after immigrating to Saratoga from Bangalore, India, in the summer of 2018 was to join the school’s cross-country team. She had been interested in running since elementary school, and she found out about cross-country while researching possible extracurriculars here.

Cross-country caught her attention because it was not available in Bangalore due to the limited access to natural terrain there.

Practices began before the fall semester, and Vanavadiya recalled how joining the cross-country team was a formative experience.

“I went to [cross-country] practice before freshman year even started — it was my first impression of pretty much everything here,” Vanavadiya said. “I was trying to research everything I could about American high schools before the move, and I found out about cross-country. I was so excited to make the team.”

Before moving, Vanavadiya attended The International School Bangalore (TISB), an elite private school in Bangalore, as a day student; TISB serves as both an international boarding school and day school and its student body consists of a mix of expatriate and local students.

TISB has different curriculums based on grade levels. Students from sixth grade to eighth grade follow the school’s independent curriculum based on international standards. In ninth and 10th grade, students transition to the International General Certificate of Secondary Education (IGCSE) curricular standards, taking the IGCSE exams at the end of the year.

External board examinations like the ICSE and IGCSE are of utmost importance to high school students in India. Unlike the U.S., where there is no national or international board of education, most institutions in India are required to follow these centralized curricula.

India’s severely underfunded public school system also has a major flaw: Most schools are not taught in English. This means that the students do not learn English as a primary language, causing major long-term setbacks, especially for students who plan to seek a higher education and join the white-collar workforce.

This is an issue addressed by private schools — while they previously catered exclusively to affluent families, an increasing number of low-cost private schools means that an English-focused education is becoming more accessible to the masses of low-income and lower-middle-class students.

What differentiates elite international schools from typical private schools and government-run schools is their propensity to prepare students for college abroad. Many offer the International Baccalaureate Diploma Programme (IBDP) for their 11th and 12th grade students. The IBDP, or IB program as it is more popularly known, is an internationally accepted curriculum not central to any single country.

India’s own higher-education system is rigidly structured. Unlike U.S. universities, most universities in India offer only select divergent streams: either engineering or liberal arts. A student attending college in India typically chooses their 3-to 5-year degree pathway upon completion of 12th grade. Because the streams are separated, interdisciplinary study is difficult compared to international universities that offer elective choices, double majors and minors. As a result, many affluent graduates are leaving the country to study abroad. The mission of international schools is increasingly to prepare them for it.

Because Vanavadiya attended TISB from the sixth to eighth grade, she did not study the IB curriculum. Nevertheless, her school was fiercely academically competitive — even more so than Saratoga High, she said.

“Although [TISB] did have sports and music, they didn’t place as much emphasis on extracurriculars,” Vanavadiya said. “I took orchestra both here and there, and it’s taken seriously [at SHS]. There are major orchestra trips and concerts, and the music teachers over here are much more committed to it as a subject.”

Part of this competition might be because international schools such as TISB aim to prepare students for higher education in the U.S., Canada, U.K. and European countries. The competition is ramped up due to the limited number of spots — normally less than 5% — that these universities offer to international students.

While she didn’t feel the academic rigor was an entirely bad thing, she prefers the well-rounded experience SHS offers. Vanavadiya particularly noted the lack of school spirit in her previous school compared to SHS. As an active varsity athlete and member of the orchestra for the past four years, Vanavadiya was able to enjoy the multifaceted education she looked forward to when she first moved here.

“The academics at TISB were so rigorous that they really prepared me for when I moved. What I studied in freshman year here was similar to what I studied in eighth grade over there. But as I went into sophomore and then junior year, it began to catch up with me,” Vanavadiya said. “The flexibility in which classes and extracurriculars I chose helped me balance it out.”

Despite her academic success during freshman and sophomore year, Vanavadiya’s journey to assimilation was a difficult one at first. She had a hard time fitting in with her peers who had gone to the same elementary and middle school and already formed their own groups. Additionally, her Indian accent was sometimes a source of embarrassment and frustration. Vanavadiya also felt that Saratoga students were more socio-emotionally mature than many of her peers in TISB due to a heightened sense of independence and self-sufficiency and that she had to change her own mannerisms and style to fit in.

Still, one thing has remained constant throughout her high school journey: her love for cross-country. Being a part of the team gave her a way to make friends, participate in extracurricular activities and foster a sense of belonging.

She eventually found friends and now feels at home in the community. Vanavadiya did not lose her Indian accent — instead, she explained, she was able to become more confident about herself and her background. The diverse community she found in her new home made a big difference in her years here.

“I wanted to hide important parts of myself at first — but the people I met here made me realize that there was actually no need to do that to myself,” Vanavadiya said. “Now that I’m in my senior year, I’m happy I was able to explore my interests to the fullest extent.”