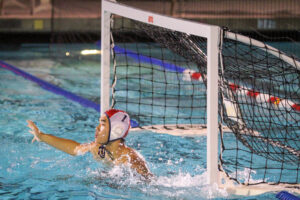 Senior Andrew Hong defends the goal at the team’s last game against Lynbrook on Oct. 29. The Falcons ultimately lost 8-7.

The boys’ water polo team lost 8-7 against Lynbrook during league finals on Oct. 29, ending their season without qualifying for CCS. The championship game garnered the team’s largest crowd of their season.

The ending of the closely fought match included missing a five-meter call and a penalty shot, leading to the Falcons’ one-point loss.

“After each goal, the crowd would chant our name or ‘MVP,’ which was really encouraging,” Kwa said. “Even though we didn’t get the result we wanted, I’m happy with the way things turned out.”

The Falcons dominated this season with a 9-1 record coming into leagues, placing first in the El Camino league and winning most games by a margin of four or more goals.

Senior goalkeeper Andrew Hong attributes much of the team’s success to the senior-heavy lineup as well as their efforts to live up to the expectation of being the best team in the league.

Throughout the season, the team honed their skills under new coach Mike Fleming. He allowed the more experienced players to decide what the team needed to focus on, Hong said. Fleming would work with newer players during drills, letting the veterans train on their own, because “they had three years of experience together and knew what was best for the team.” One of their favorite shooting drills was from the UCLA men’s team, which the late coach Jerome Chung introduced to the team when they were freshmen.

After beating Santa Clara and Wilcox in leagues, the Falcons matched up against Lynbrook in the league finals. Prior to leagues, Lynbrook was the only team that had managed to defeat the Falcons, making this a crucial game for the team, not only to qualify for CCS, but also to redeem themselves.

With the loss, the team will have to wait until next year to triumph against the Vikings — which may prove difficult, because many of the team’s star players will be graduating this year. The returning varsity team has only four non-seniors. Hong said this lack of players may force the current seven-man JV team to merge with varsity, significantly  hindering  new talent.

“Water polo is an underrated sport and I’m just disappointed at the lack of players — it’s going to die out,” Hong said. “I won’t be surprised if Saratoga doesn’t offer water polo [in future] years, but I’m glad where it’s headed right now.”