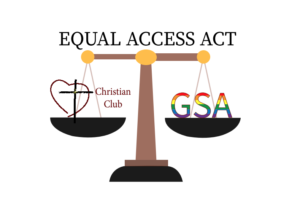 When a student — whose identity remains confidential due to Associated Student Body (ASB) rules — was notified in mid-October that their club was rejected, the student emailed the club commissioners and brought to their attention the Equal Access Act of 1984, a federal law that prohibits schools from denying student groups the right to meet for “religious, political, philosophical or other content of the speech” reasons.

The ASB and school officials are now grappling with determining the law’s scope and potential repercussions that may fundamentally change the club approval process.

Traditionally, ASB has evaluated clubs by the criteria outlined in a holistic rubric in order to avoid an oversaturation of opportunities offered to students. The club that cited the access act was rejected because it did not meet the majority of the criteria listed on the rubric.

After the rejection, the student notified the ASB of the Equal Access Act.

“[The student] talked about how the rejection was supposedly unlawful and discriminatory,” senior club commissioner Grace Hsu said. “Once [the student] introduced this act to us, it just crumbled our system. Everything has been really confusing because we don’t know how the act specifically applies to our school.”

In response, the club commissioners set up a meeting with the student, two members of ASB and activities director Kristen Cunningham. The ASB is also talking to principal Greg Louie, district superintendent Mike Grove, representatives from the Federal Department of Education and Santa Clara County Department of Education, the district’s legal team and other schools in the area.

The act states that public schools cannot discriminate against non-curricular clubs based on their “rhetoric” and was intended to protect clubs such as a Bible group or a LGBTQ+ group. But “rhetoric” is so vague so the act can practically apply to all clubs, senior club commissioner Nandini Desai said.

However, the club commissioners found some differences between ASB-affiliated clubs and the clubs that are protected under the act: Clubs that are not accepted by ASB do not receive funding, have a bank account or participate in Club Rush and Club Day.

But rejected clubs can still function as an unaffiliated group, Hsu said. Currently, ASB is trying to figure out what the law means, as it could lead to potential lawsuits if a club believes a rejection is unfair.

“We’d rather handle it now and take it head on rather than pushing it onto future ASB officers when it might create a much bigger problem,” Hsu said. “We’ve been pretty transparent about it, and we’re not afraid to tell people.”