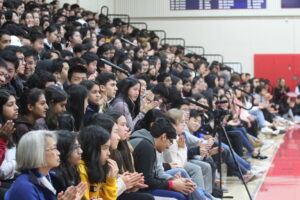 Students listen to speakers at Speak Up For Change in 2019

Permalink
Delegating outreach commission’s former tasks to other members of Leadership was found to be stressful and inefficient.

Before the COVID-19 pandemic, the outreach commission organized many of the school’s annual events, including Speak Up for Change week, Red Ribbon Week and the blood drive.

Last year, however, ASB made the decision to cut outreach —  the less spirit-oriented commission focused on publicity, mental health and social justice issues — and hand its responsibilities to the ASB vice president to delegate throughout the class offices. The commission quickly realized that delegating tasks wasn’t working, and are working on forming an ad-hoc commission for the current school year.

“[ASB] felt that outreach carried out activities that other groups could do,” assistant principal Matt Torrens said. “They felt that the class officers could do [outreach’s tasks], rally could do that spirit commission could do it as well.”

Torrens explained that the initial goal of cutting the outreach commission was making the Leadership class smaller and closer-knit. He said although the idea made sense in theory, ASB quickly realized that for Leadership students, taking on the responsibility of outreach along with their original responsibilities was too much to handle.

ASB vice president Alex Yang now assigns the outreach commission’s previous tasks to other students in Leadership, and he said that although the commission doesn’t exist anymore, most of its tasks are still being carried out.

“This year, something new we’re trying to implement is an unofficial outreach commission: A few Leadership students throughout the classes are working on outreach’s former events,” Yang said. “For example, while our freshman orientation is normally done by outreach, this year it was done by the rally commission for both the freshmen and sophomores.”

Yang said that most Leadership students were interested in participating in spirit-related tasks but not as much with outreach responsibilities, which led to a lack of interest and a lot of stress on those who were a part of the outreach commission.

“The original plan was to pass outreach’s responsibilities off to the other commissions, but I don’t think [previous ASB leadership] realized the sheer number of activities outreach did last year,” Yang said. “It doesn’t make sense to pass it off.”

The responsibility of organizing Red Ribbon Week, which took place from October 25 to 29, for example, was delegated to senior Rima Christie, the head of the rally commission.

For Christie, working on Red Ribbon Week was manageable because it did not overlap with the planning of a rally; nonetheless, she believes that having an “outreach representative” would be more efficient than distributing tasks to other Leadership students.

“You have people with their feet in two different boats right now,” she said. “You want someone who’s going to do the job really well because there are important events [that outreach handled].”

Yang said the Leadership students still don’t know what the outreach commission will look like next year but he is working through logistics with senior Catherine Kan, who was previously part of the commission and is a strong advocate for bringing it back.

“[Kan] wants to have one or two people in the leadership class that have roles specific to outreach; she doesn’t want people with a lot of their own leadership responsibilities to also do outreach,” he said.

Kan said she is in favor of having students dedicated specifically to the outreach commission because its role is especially important right now when students may be struggling with anxiety and other mental health issues after returning to in-person learning after a year online.

For this reason, Kan has been outspoken about her efforts to restart the commission with the Leadership class’s cooperation.

“I think it’s really great that people in leadership like [senior ASB president] Derek Hsu and Alex Yang are fully willing to work with me to bring it back,” Kan said. “While spirit is important, a big aspect of being in school is addressing the issues that outreach typically focuses on.”

Kan said that students — especially freshmen and sophomores who are dealing with the unfamiliarity of being on campus — would be able to benefit from the outreach commission. Along with planning events related to Title IX and  recycling measures on campus, the commission would have been able to reach out to new students and expose them to different aspects of the school.

“Outreach just didn’t have enough on it’s plate before, they did their job well, I just think their skills weren’t being used to the fullest,” Christie said.