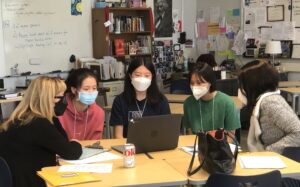 Permalink
Sixty of the 81 students who advanced to the South Bay Peninsula History Day Competition for Santa Clara and San Mateo Counties will be advancing to the California State Finals the day after their AP Exam, on May 7, in Rocklin, CA.

For their National History Day (NHD) project this year, juniors in AP United States History used a variety of mediums — historical papers, documentaries, exhibits, performances, podcasts and websites — to explore issues based on the 2022 theme of “Debate & Diplomacy in History: Successes, Failures, Consequences.”

The juniors in teacher Faith Daly’s classes took inspiration from issues ranging from the 1969 Stonewall riots advocating for gay rights to the 1898 annexation of Hawaii.

Saratoga High has participated in National History Day for over a decade, with the exception of last year due to pandemic conditions. This year, 81 students participated in the senior division of the Santa Clara County competition, held at the school on March 12. Each category selected an honorable mention and three champions to proceed to the next level. (Additional details about winners and their projects can be found in the sidebar below.)

“I’m really glad that NHD gave us the opportunity to conduct this research project,” junior Maithili Kulkarni said. “It taught me the importance of looking at both sides of an issue and how to do that — looking for good primary resources, for example. I had a lot of fun with it.”

Maithili Kulkarni: Stonewall and the Gay Rights Movement: Continued Oppression on the Basis of Gender and Race

Kulkarni and her two group members made a group documentary titled “Stonewall and the Gay Rights Movement: Continued Oppression on the Basis of Gender and Race.” It won one of three Champion group documentaries awards at the competition.

All APUSH students were required to complete a research project, but submitting their entry to NHD was optional. The school can send up to four entries per category to the county competition. While NHD has also been offered in Geography, MAP English 9 and as an extra credit assignment in the past, such entries are less common now.

Daly said that the absence of a school librarian since the retirement of Kevin Heyman two years ago has been a major problem with no dedicated research specialist on campus. Even so, some have been able to find adequate sources and information through research sites such as the JSTOR and EBSCO databases.

Kulkarni conducted her research with a question in mind — were the Stonewall riots a turning point for gay rights as popular understanding had commonly suggested? She found out that while the Stonewall movement sparked a change in the gay rights movement and turned previously “complacent” demonstrations into more active ones, there were still LGBTQ+ minorities that existed within the gay community at the time. People of color and people of different gender identities, such as transgender individuals, were still discriminated against.

While she and her group conducted research as part of their APUSH homework for a few weeks before beginning to plan their documentary, Kulkarni said she still found some of their best primary sources near the end of the project, a few days before it was due on March 2.

Their documentary features 120 photos of the movement and narrations from voice-overs of all three group members. Kulkarni estimates that the total amount of time for finding the photos, recording the voiceovers and assembling the documentary was 20 hours.

“We thought that a documentary would provide a more complete picture because it has both audio and visual elements,” she said. “It just took a lot of time.”

Junior Lisa Fung wrote a historical paper titled “Relations Turned Sour: The Delano Grape Strike and Boycotts.” She found out about Cesar Chavez and the farmworkers movements in her Spanish class and decided to pursue the topic for her NHD project because of the parallels between the NHD theme and the tactics farmers used to grow their debate.

Her paper focuses on debate and diplomacy spanning from 1965 to 1975. It begins by providing a synopsis on the background of farmworkers in California, goes through how farmers partnered with organizations to gain public attention and concludes with historical significance, the gains and failures in managing the farmer unions.

Fung primarily conducted research on the JSTOR and EBSCO databases, but found much of her primary sources online in the form of posters, images and speeches.

Though the project involved many stages — researching, creating an outline, writing and editing — she said the APUSH class schedule helped her coordinate and plan her time. Students tracked their progress through two to three new note cards each class and were given a week to combine their research into a final project.

“It was definitely easier in the beginning, and it gradually became more difficult as I conducted research and compiled that into a paper,” Fung said. “It took a long time, but it was a good learning experience on how to formulate a strong argument.”

She noted that the historical paper involved more research and was generally longer than most English papers — papers needed to be between 1,500 and 2,500 words.

Throughout the process, her favorite moments were discovering new sources and making correlations between them. For example, Fung said that she previously hadn’t correlated the United Farmworkers, the main union fighting for farm workers’ rights, and the Black Panther Party, which was more violent and associated with socialism. While the two groups were different in tactics, their aims for social justice were similar and they were intertwined in ways not popularly known.

“Outside the project, history just seems to be reading from a textbook and analyzing documents,” she said. “But for NHD, you had to consolidate all the documents and see how different sources contribute to a holistic view of what really happened. That’s the coolest part about it.”

Other groups were interested in analyzing the future impact of past historical events.

Dyne Lee: The Annexation of Hawaii: Hawaiian Marginalization as a Result of U.S. Imperialism

For junior Dyne Lee and her two group members, the subject of the annexation of Hawaii fit their interest in American expansion into overseas territories.

They created a website documenting the influences over the debate in Congress, which discussed possible economic advantages and ethical concerns about Native Hawaiians opposing annexation. The group considered multiple factors affecting the debate and concluded that petitions created during that time didn’t influence the debate as much as other factors.

Lee said she and her group spent a few weeks finding sources, summarizing text into notecards on NoodleTools, online research management platform, and analyzing how each piece of evidence supported their argument. Afterwards, they began the repetitive process of writing, cutting, finding more sources and writing more note cards.

While research was an expectedly arduous process — the group had 30 to 50 sources — she said building the website was a “lot harsher” than she expected.

“Formatting, making it look good and keeping articles concise to fit under the word limit was pretty difficult,” Lee said. “But I enjoyed finding the political cartoons and photographs of people that we used as visuals.”

Wasil Khan: Change Through War: The Legacy of Change Brought by the Vietnam War

As soon as he saw the theme “Debate and Diplomacy,” senior Wasil Khan, president of the Democracy Matters Club, immediately thought of the Vietnam War.

Throughout the war, public opinions about U.S. participation remained half-half. Khan’s website, which won a Champion award at the competition, talks about the specific impacts the division caused and factors that influenced foreign policy and immigration decisions.

While most groups said they started the project in January or early February, Khan admitted he started the afternoon before it was due and finished at 4 a.m.

“There’s a lot of things I could’ve done better, but I enjoyed making the website because it was something new,” he said. “I also felt that this project was better than ones I’ve done in the past: It’s more formal since it’s an actual competition and not some randomly assigned essay.”

Khan’s interest in history started in elementary school. He hated English “with a passion” and other subjects didn’t make as much sense to him, but found history interesting because it was similar to the retelling of a story.

Daly has noticed that the freedom of choice in the competition frequently allows students to be passionate about their subjects.

Daly has been involved with NHD for over two decades, ever since she was in 7th grade. She is on the NHD-CA State Board and is one of the coordinators for South Bay-Peninsula History Day, which covers the Santa Clara and San Mateo Counties.

In her senior year of high school, her team qualified as finalists at the Nationals stage, and she attributed the competition as a major part of why she decided to major in history.

“For many students, it’s a life-changing experience, or at minimum, a highlight of their middle and high school years,” Daly said.

Group Documentary: Kulkarni and her team members Emily Boselli and Anjali Thomas created a documentary about Stonewall and the gay rights movement. Samuel Jung, Ara Esfarjani and Jason Liu’s documentary focused on the Cuban Missile Crisis and the debate on nuclear arms.

Historical Paper (individual only): Fung wrote a paper about the Delano Grape Strike.