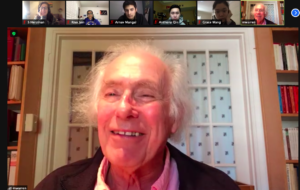 As senior Anthony Liu logged onto his AP Literature class the week before finals, he made a mental note to have his copy of Othello by his side. Smiling and greeting Michael Warren, an professor emeritus of literature at UC Santa Cruz, Liu picked up his pencil and prepared for an insightful day of discussion and analysis.

Days before winter break began, MAP 9 and AP Literature teacher Suzanne Herzman invited Warren to talk to her senior literature students. Warren has been visiting English 11 Honors and AP Lit classes for the past decade.

Herzman first met Warren at an Oregon State University NEH Summer Institute for a Shakespeare seminar 17 years ago. After finding out that he was from Santa Cruz, the same city that she lived and taught at, she began inviting Warren to her IB classes while teaching at Scotts Valley High School. Even after transferring to Saratoga High in 2009, Herzman continued to invite Warren to discuss Hamlet with English 11 Honors sections and Othello with the AP Lit classes.

“Hamlet was cut from the junior curriculum this year, but I still reached out and asked how he felt about a Zoom call with my two lit classes,” Herzman said. “He was totally game and it was lovely.”

Just as he would have normally done in in-person school, Warren guided the classes through a “text crawl,” where students read closely and annotate the literature together. To encourage students to analyze Shakespeare’s work, Warren played video clips explaining scenes and led them through online performance exercises.

“The ‘text crawl’ is fundamental to the act of literary and often theatrical interpretation; everything begins with the words of the text,” Warren said. “In Shakespeare plays, the character’s language is our primary, almost exclusive, source for our understanding of their behavior.”

Warren believes that analyzing the text is especially important to demonstrate the interplay of characters, helping explain certain actions and thus intellectual, emotional and moral issues.

While this year’s format was unusual, Warren sees his annual visits as a source of delight and was “pleased to sense how much there was a feeling of community in the Zoom room.”

“In making me think anew about a play in advance and engage in conversation with students for a couple of hours, the classes provide me with pleasurable and beneficial intellectual exercise,” Warren said. “These plays are profound and beautiful and also challenging parts of our culture. I always leave with a sense of hope for the future.”

Warren added that he was pleased with the students’ engagement and high-quality questions.

Herzman said the Zoom format allowed for a more collaborative learning environment. For example, she said that through the chat feature, she could moderate the discussion more effectively.

Rather than having several classes come together in a MAP classroom, Warren was able to answer individual questions and foster a sense of community.

“I realized I'd been spending so much time thinking about the shortcomings of remote learning that I almost forgot to take advantage of what Zoom can do,” Herzman said. “In a strange way, all of us huddling over our screen was more intimate than sitting in a room of 100 students.”

While she would not go as far as to say Zoom visits are better, Herzman said she is grateful for the greater flexibility in planning speaker events and appreciates students’ efforts to be active and engaged.

Liu said he valued Warren’s visit to the class and was grateful for the opportunity to ask more questions than he would have in a larger group. He said he appreciated that Warren was attuned to what students found interesting and made sure to delve into these topics.

Warren posed questions about Othello that required the class to analyze the text. For example, he asked the classes how old they thought certain characters were based on the way they acted throughout the novel.

“Professor Warren paid a lot of attention to detail and focused heavily on the intersection between several themes,” Liu said. “I found this super engaging and definitely something I can use in future papers I write.”

Herzman said Warren’s lessons provide students a different perspective on the topic they are studying.

Since Warren’s visit last December, Herzman has also reached out to SUNY Geneseo professor emeritus Dr. Ronald Herzman, who spoke on Jan. 21 to her AP Lit classes. She has also invited Dr. Megan Dent, a former student who has a PhD in Victorian Literature, to speak to her class in February. Because Dent currently lives in England, online school will allow her to easily teach the classes without having to travel.

Guest speakers are not just limited to her literature classes either; Herzman brought in MAP 10 teacher Alex Hemmerich to her MAP 9 class earlier this year to guide the students through an interdisciplinary media project.

“There are so many things that I don’t love about online school, but bringing in guest speakers is one thing that we should be using to our advantage,” Herzman said. “At the very least, it just breaks up the cycle of looking at the same faces every day.”

Both students and teachers alike see the value in guest speakers in order to provide a unique experience during the potential monotony of online learning.

“I really appreciated Professor Warren’s genuine passion for literature and his energy brings out excitement for studying Shakespeare,” Liu said. “Having industry veterans as guest speakers is a great way to circulate new ideas into the classroom while also resparking passion for the entire class.”