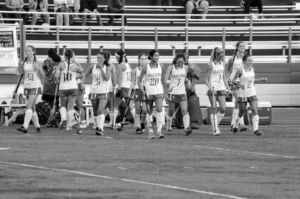 The field hockey team runs onto the field at the beginning of their game against Homestead.

After a year of COVID-19 related obstacles, the Falcons resumed fall sports and faced ups and downs: Several teams and individual athletes triumphed in league finals and CCS, while some experienced low player participation. Overall, the athletes are pleased with their play and look forward to next season.

The girls’ cross country team saw an increase in participation coming out of the COVID-19 year, returning to its usual 50 runners in comparison to last year’s 14-member team; meanwhile, the boys’ team saw a decrease from 20 to 13 runners. Seven athletes from each team qualified for the Central Coast Section (CCS) Cross Country Championships; qualifiers finished their season on Nov. 14 at Crystal Springs in Belmont.

Dance has also advanced to the California Interscholastic Federation (CIF) State Cross Country Championships, which will be held on Nov. 27 in Woodward Park, Fresno.

The football team had a rough season this year with a 1-4 league record and 1-8 overall record, with their only win being a 31-14 Homecoming victory over Monta Vista on Sept. 24. They placed 6th in the El Camino league.

Throughout the season, the Falcons fell victim to a string of injuries; the loss of ten players to injuries — five concussions, four shoulder injuries and a broken leg — exacerbated their already small 25-person roster. Thus, the season ended with three game forfeits against Los Altos on Oct. 14, Cupertino High on Oct. 29 — which marked their senior night game — and Fremont High on Nov. 5.

The field hockey team finished first in the El Camino League with a record of 9-1 and made it into CCS championships on Oct. 27 after a 4-0 win against Palo Alto. On Nov. 1 they played their first round of CCS against San Benito, winning 3-0 with goals  from junior forward Kayla Steele, senior co-captain and left center back senior Olivia Kinoshita and senior center mid Lauren Yarrington, as well as senior goalie and co-captain Nandini Desai’s masterclass defense.

However, the team closed their season with a heartbreaking 2-1 loss against Leigh on Nov. 3, ending their journey toward the CCS championship. Despite their loss, members of the team were proud to be the only fall sport team to qualify for CCS this year, Kinoshita said.

Following their accomplished season, the team has high expectations for next season. Despite the loss of eight current senior athletes to graduation, sophomore defense player Zinneerah Ahmed is confident the team will continue to carry out their success.

During their final match against Gunn at Baylands Golf Course, the girls’ golf team lost by a score of 209-232. With a final record of 8-2, the team fell short of collectively qualifying for league finals.

However, the No. 1 and No. 2 players, freshman Sarah Lim and senior Savannah Lin respectively, qualified as individual players to League Finals at Santa Teresa Golf Course on Oct. 19. At League Finals, both players qualified to CCS — Lim with a score of 76 and Lin with an 81 — and played on Nov. 2 at Laguna Seca Golf Course. At CCS, Lim shot a 77 and tied for 20th place, while Lin shot a 78 and tied for 24th out of 114 players. The required score to qualify for CCS finals was a 72, meaning neither advanced to the next round.

The girls’ tennis team attributed their frustrating 0-12 record to the low participation, inexperienced players and difficult opponents. The team had only 11 players instead of the standard 12 to 14.

Additionally, the team was challenged by a lack of tournament experience, with the majority of the team having not participated in many outside-of-school tournaments during the pandemic. With the team struggling to win games, head coach Florin Marica has considered dropping the team from D1 — a decision that senior co-captain and No. 1 doubles player Catherine Kan agrees with.

Despite many setbacks, Kan is optimistic about the future of the team. She saw improved team spirit and communication throughout the season and feels her younger teammates have the potential to reestablish the winning ways of the program.

The girls’ volleyball team’s losing season was largely attributed to a young roster, adjusting to the style of new coach Thomas Ching and the unexpected exit of senior opposite hitter Sonia Purisai in mid-October.

As a result, the team won two league games, beating Milpitas on Sept. 9 and again on Oct. 26. The Falcons placed 6th out of 7 teams in the El Camino league with a 2-10 record.

Despite the rough results for a team that has often made CCS in the past, junior captain Lisa Fung thinks they can rebound next fall.

The boys’ water polo team lost 8-7 against Lynbrook at league finals on Oct. 29, and did not qualify for CCS. Despite the loss, the Falcons dominated in the El Camino League this season with a 9-1 record coming into leagues, winning most games by a margin of four or more points.

Senior goalkeeper Andrew Hong attributes much of their success to efforts to live up to the expectation of being the best in the league coupled with the senior-heavy lineup: The varsity team only has four non-senior players. However, this means many of the team’s star players will be graduating this year, so repeating this year’s success next year will be tough.

With their round robin SCVAL league championships — which resulted in  a 12-1 loss to Fremont on Oct. 26, a 8-6 loss against Monta Vista on Oct. 27 and an 11-8 triumph to Santa Clara on Oct. 29 — the team placed 7th in the El Camino division. The Falcons had a league record of 2-14, with wins to Santa Clara and Cupertino.

The team faced challenges with the loss of key players to graduation, several injuries and a lack of experienced athletes. Additionally, some team members expressed frustrations over the style and philosophies of new coach Alex Hsueh.