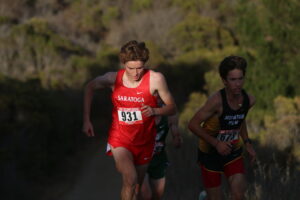 Boys’ and girls’ CCS Cross Country Championships qualifiers finished their season on Nov. 14 at Crystal Springs in Belmont. Leading the pack of Falcons was senior co-captain Harrison Dance, who placed first in the Division III and 13th overall out of 504 boys with a (event) time of 15:43.7, translating to a 5:19.9 mile pace.

Dance’s time qualifies him for the California Interscholastic Federation (CIF) State Cross Country Championships, to be held on Nov. 27 at Woodward Park in Fresno. As he prepares for CIF, Dance will meet with his coaches on Tuesdays and Thursdays to work on increasing the intensity of the workouts.

“I was pretty happy with my place at CCS,” Dance said. “ I know I didn’t run the fastest that day, but I was still happy and ultimately the goal is the state meet so I’m excited for that.”

The seven runners who qualified for CCS on the boys’ team were Dance and senior Hrishikesh Rao; juniors Wasil Khan and Anand Agrawal; and sophomores Shaolun Sun, George Hu and Jacob Merrill. The seven from the girls’ team were senior Amoli Vanavadiya; juniors Elizabeth Stoiber, Carolyn Wang, Isha Goswami and Miranda Yee; and freshman Hillary Gonzalez and Anisha Rahut. Saratoga girls placed 44th out of 56 schools for their final team standing, while the boys’ team placed 32nd out of 66 schools.

In the days leading up to CCS, both teams prepared for the race as they reminisced on the one-of-a-kind season they had this year.

“I think having our team bonding nights again really brought the team together like it couldn’t before,” Wang said. “I remember when everyone just felt slightly more disconnected during the pandemic. There were only around 10 people running together at that time, but this year the team atmosphere is obvious. I think it’s just more fun when there’s so many more people.”

Wang, who is a co-captain for the girls’ team along with Stoiber and Vanavadiya, said she sees a lot of potential in the freshmen and is excited to work harder as a team next year.

“A lot of them are coming down to the track, practicing and giving it their all even after the season is over,” Wang said. “It’s those kids who I’m hoping will be able to step it up once I graduate next year and we have new people.”

While the girls saw an increase from 20 to over 50 runners this season, the boys saw a decline in participation with a total of 13 runners in comparison to last year’s 20.

Despite the initial challenges that came with a small roster, Dance and co-captain Agrawal ultimately found it easier to bond with younger runners. Dance particularly found the small but tightly-knit team beneficial and supportive as the runners trained for CCS.

“The smaller team atmosphere is nice because I’ve gotten to know each and every one of my teammates really well,” Dance said.