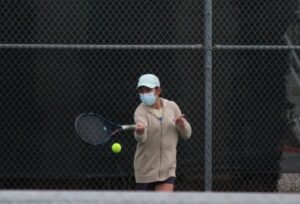 The varsity girls’ tennis team finished their season with a 0-12 record, ending 7th out of seven teams in the De Anza division.

The team suffered from a lack of participation. The varsity team had only 11 players instead of the standard 12 to 14, so while head coach Florin Marica had to cut players from the team in past seasons, he filled his roster with players who likely would have played at the JV level in the past.

The team also lacked tournament experience. Coming out of the pandemic, the majority of the team didn’t participate in many outside-of-school tournaments and had little overall practice, senior co-captain and No. 1 doubles player Catherine Kan said.

Since the team struggled so much, they might drop from D1, where they have competed for 22 years, down to the less competitive El Camino division.

Experienced team members like Kan believe dropping is a good idea, as many athletes such as the sophomore No. 1 singles player Sabrina Manea and freshman No. 2 single player Megha Horantur were discouraged this season due to the disparity in skill level.

“This entire season, they just felt super unmotivated because the girls they play would be drastically better, so I think dropping a division will be better for a lot of the girls’ confidence,” said Kan.

According to Kan, some of the Falcons’ opponents had players with universal tennis ratings (UTRs) of 7 and 8 — much higher than the Saratoga team players, who have UTRs between 2 and 4. For reference, female professional players generally have a UTR of around 11 out of 16.5.

Manea believes that her biggest problem was her nerves and how she stressed out before matches.

“Whenever I play in a tournament, I get tight and can’t play at the same level I do in practice,” Manea said.

However, to help familiarize herself with competitive formats, Manea hopes to participate in more outside tournaments. She is dedicated to tennis  and even played through a wrist injury she got toward the end of the season.

“If I just completely stopped, that would ruin the momentum I had built up, so I just wore a brace and kept practicing,” Manea said. She wore a brace during practices and taped her wrist during her last few games for more flexibility.

Despite the many setbacks, Kan sees some positives for the returning players. “This year I’ve just been really proud to see everyone getting along. That, to me, was just the best part of the whole season,” she said.