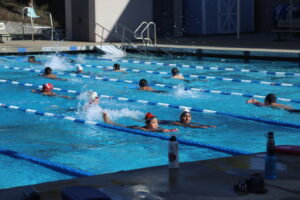 Photo by Jonathan Si
Sophomore Victoria Le and Senior Mahi Ravi kickboard next to each other during practice.

Permalink
After 2 years of canceled CCS, the swim team finally gets to go to the tournament

CCS was held at George F. Haine’s International Swim Center in Santa Clara from May 6 to May 7.

Tokuz also advanced onto finals the next day, placing fifth in B finals — the top eight move to A finals and next eight move to B finals — for the 200 yard individual medley and fourth in the 100 yard breaststroke.

Although many didn’t qualify for finals, Tokuz said that the season ended on a good note.

This year was the first year the swim team competed at CCS since 2019 because it was canceled in the past as a result of COVID-19, meaning that it was the first CCS tournament for many of the swimmers. In the practice sessions leading up to CCS, many swimmers started focusing on individual goals to set personal records for themselves. For example, Tokuz decreased the intensity of her workouts in order to focus more on specifics like dives and turns, which ultimately helped to increase her speed.

“In the 100 yard breaststroke, I had dropped from my all time best so I was overjoyed and relieved,” she said.

One challenge the swimmers faced was having to swim at a West Valley college for the most of the season due to the swimming pool’s heater breaking on Feb. 18.

“Because of the smaller swimming space, it was harder to swim because there would be around five or six people per lane,” Ravi said.

Despite these challenges, the team still tried to keep moving forward. Ravi said that the crowded lanes allowed them to bond better and the long times before practices allowed the teammates to socialize more so than in previous years, helping them get to know each other better.

Ravi also noticed that the team improved significantly as a whole from the start of the season.

“I think our team did the best we could with our struggles: We didn’t have our pool, and we didn’t have enough buses to transport to the meet,” Ravi said. “However, I actually think these struggles are what made our team closer.”