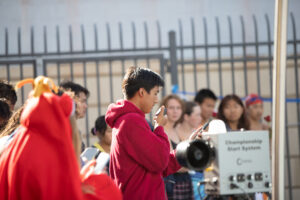 Permalink
Though they have not won any meets this season, the team has produced multiple CCS qualifiers.

The biggest issue of the season was that the team struggled with practices due to a broken filter that prevented use of the school pool. The pool was down for most of March and April. The team shifted their two-hour practices to the West Valley College pool as a solution, but it wasn’t as good as the home pool.

“The water [at West Valley] is nasty because it’s saltwater,” sophomore Amaris Charton said. “Some of us refer to it as ‘miso soup,’ and the salt affects the way you feel in the water, which sometimes slows me down.”

However, despite the lack of their usual pool, the team made the best of their situation. Practices ran as usual, generally beginning with a warm-up swim set along with main sets, which occasionally include dives and relays.

Though the broken pool and the reality that many members were injured at the beginning of the season prevented the team from being able to host home meets, the team has still made the best of the situation.

“Having everyone supporting each other has been amazing and we just have a fun environment to be around,” Tokuz said. It is hard to keep in touch with a lot of the freshmen, though, as a lot of them don’t have social media. Bonding has improved as the season progressed.”

To celebrate the team’s senior night, which occurred on April 22 at the Los Gatos High pool, juniors and underclassmen on the team prepared gifts and speeches for all ten of the seniors.

Tokuz and other juniors purchased supplies and gifts for the seniors, organized two poster-making sessions before practices and created custom shirts for each of the seniors.

“The most memorable part of the senior night for me was giving my speech,” Tokuz said. “The seniors meant a lot to me this year and everything just hit me when I started my speech.”

The season has almost come to an end for non-CCS qualifiers and Tokuz said the team is satisfied with their season.

“Our goal was to acquire as many CCS qualifications as we could and to create a supportive and fun environment,” Tokuz said. “I think that we did a lot better than I expected, and this season has definitely been one of my favorites.”