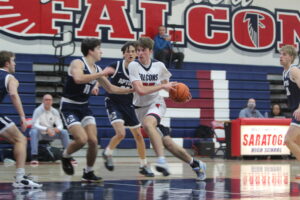 Photo by Atrey Desai
Senior Mateusz Palusinski dribbles the ball down the court in the Thursday game against Aptos High School.

Permalink
The boys’ basketball team has welcomed a new member and is looking forward to playing in the De Anza League.

Recap: The team was promoted to the upper De Anza from the lower El Camino Division this year.

“Last year we started off strong, but then we started losing the winning streaks after January,” senior captain Mason Wang said. “I think the reason was a lot of the players were burnt out. We were playing without any breaks between the weeks, so we would have 14 days of consecutive basketball.”

The team went 16-8 and placed 4th in the El Camino, but they lost in the CCS second Round to Sobrato 78-74. Although they lost key players like Giulio Morino and Som Teymouri to graduation last year, the new varsity players will manage to fill in their shoes.

The newest addition to the team, senior Nick Tjaden is an excellent shooter and a playmaker however he is currently out with an injury. Bryan Wang will start as the point guard. Another key player is Mateusz Palusinski due to his height and experience as a center. Niveydh Pai and Julian Berkowitz-Sklar are also strong guards and Mason Wang will start as a forward.

After former coach Patrick Judge departed in the offseason, the Falcons have welcomed back returning coach Mike Davey, who has over nine years of coaching boys’ basketball experience up until the 2008 season. Davey also holds the record as the coach with the most wins in SHS history, leading the Falcons to a total of 231. While he believes they still have a lot of work to do, Davey said that the team has a lot of potential, and they are currently working on defense, rebounding and execution for further improvement.

To show players where they need to improve, he shows them videos of how they are playing and points out areas for improvement.

Players like Davey’s extensive knowledge of the game and the demands he places on them.

“We’ve all been extremely comfortable asking him questions because we know that he cares about a learning environment,” senior guard Julian Berkowitz said. ”We know there won’t be repercussions for not understanding a play or a set. Davey’s really good at that.”

Davey’s coaching expertise means there are no surprises when it comes to what to expect from other teams.

On Nov. 17, the boys team played their first official preseason game against Aptos High School, walloping the Mariners 64-35. “Obviously a win is a win, so we’re excited about that. But I think the whole team, including the coaching staff, knows we could have played better in the first half,” Berkowitz said.

He attributed their main problem to the intensity of their play, something they improved on moving into the second half. The bigger players on the team such as Tjaden and Palusinski stepped up during the second half, cutting the 12 offensive rebounds in the first half to just two.

Their decisive victory and room for improvement shows the team’s great potential, according to Davey.

“We ended up fourth in the El Camino League last year and somehow made our way to the De Anza League this season, which is a huge jump I’ve never heard of before,” Davey said. “But [the players] are working hard and making huge progress in a lot of fundamentals that were not our best before. We are quick. We shoot it well. So as long as we keep working up I believe we can make it.”