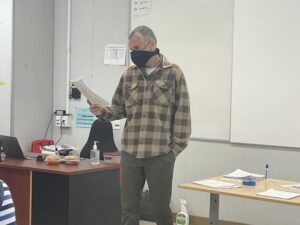 Photo by Natalie Chua
Petersen instructs the class about an upcoming project during class on Sept. 14.

Following the temporary leave of AP Computer Science teacher Thomas Wang and the departure of teacher Jarvin Bayona, Brandon Petersen joined the school’s teaching staff at the start of the fall semester. He is acting as a replacement after Wang — who is living in Taiwan on a Fulbright scholarship — took a leave of absence until the middle of spring semester.

Graduating from Citrus College in Glendora, Calif., for his undergraduate degree, Petersen fell in love with computer science following his enrollment in programming classes as a part of his general education requirements.

“The school I first substitute taught at was a really good school. The students and teachers were super friendly,” he said. “I’ve come to believe that I was always meant to be a teacher.”

After eight years of teaching in Southern California, Petersen finally made the move to Saratoga that he was looking forward to for many years, since his wife’s family currently lives in Saratoga.

Petersen said that he was delighted by students at Saratoga given their diligence and attentiveness.

“It was a bit of a culture shock at first,” Petersen said.

“I especially noticed that during the fire drill, all the students were lined up nicely and listening to their teachers. At my previous school, it would be chaotic during something like that.”

Hoping to allow students to be comfortable with discussing programming, his main goals are for all his students to develop a genuine love for computer science and succeed on the AP exam.

“The students here are really great,” he said. “I hope that by the end of my class they are all comfortable creating their own projects, and can turn any one of their ideas into reality.”

Petersen hopes to inspire students who are interested in programming to pursue computer science while in high school, enabling them to speak with experts in the field and bring their ideas to life.

“Right now, we are mostly doing an intro to programming, and that can be a bit slow for both me and students who have programmed before,” Petersen said. “However, I am really looking forward to group and individual projects where students can use what they have learned.”