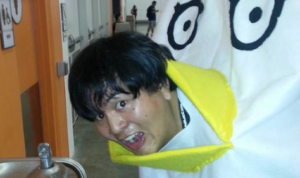 Mr. Bayona smiles for a photo in a chicken costume back in high school.

During a class in August, new computer science teacher Jarvin Bayona purposely misspelled “system.out.println” during a demonstration without capitalizing the “s.” He expected his AP Computer Science class students to be attentive enough to catch this mistake, as well as other mistakes through the class.

After five years of teaching at Bay Area schools including Lafayette Intermediate School, Liberty High School and Sobrato High School, Bayona is teaching both computer science and math this year at the school.

He teaches two periods of AP Computer Science and one period of Precalculus Honors — all on Red Days. His arrival here bumped the school’s number of AP CS classes to five, allowing more students to take it.

In all of his classes, Bayona said his goal is to increase student engagement and excitement by introducing activities that allow students to interact with his lessons.

His emphasis on making his lectures interactive and exciting comes from his experience as a student.

“I thought about going into teaching because of how often I found myself helping my classmates with their schoolwork,” Bayona said. “Then, in high school, I solidified the idea that I wanted to go into teaching math specifically because I had a very influential teacher.”

Bayona remembers one of his math teachers going on tangents unrelated to math, which made the class entertaining although “the teaching wasn’t the best.”

“He was a very colorful teacher that made learning in the classroom fun,” Bayona said.

Bayona initially focused on teaching just mathematics after graduating with a math degree from UC Santa Cruz, but later picked up computer science when the previous computer science teacher at Sobrato High School left in the middle of the semester.

“It was hectic trying to get used to the new curriculum, but I wanted to make sure that the school was successful in getting the students the education that they desired,” Bayona said.

“After lecturing us on the properties of a function, he did an interactive coding using BlueJ where he told us the goal of the code and was open to suggestions on how to write it,” Chang said. “As soon as he started, the classroom became lively as everyone started to suggest ideas.”

In line with his goal to make students feel more at home, Bayona also plans to personalize his classroom with anime and game-related decorations.

Outside of teaching, Bayona spends time playing his favorite games, Battlefield and Dota 2, and is an anime fan. Change said the combination of Bayona’s passions and in-class activities allow students to participate in a welcoming classroom environment.

“He makes me want to participate, unlike some of my other classes, which are dead silent and only force students to participate by assigning a grade to go along with it,” Chang said. “I’m sure I will learn everything I need to know in Bayona’s class.”