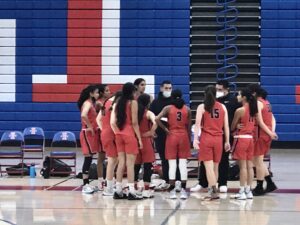 Permalink
Potential coaches for SHS athletics must undergo a series of interviews and training protocols.

When junior Rosie Kline first heard that the girls’ water polo team would be undergoing another coaching change for the 2021-22 season, her initial feeling of disappointment quickly faded into resignation.

Over the past three years, the team has had through four different coaches, each with varying levels of experience and different philosophies.

“I think adaptation is a good skill to have, since coaches have a lot of different interpretations of how to play the game,” Kline said. “However, it’s frustrating when you really like your coach and then suddenly you get a new coach and that process keeps repeating every year.”

While the staff changes for water polo were under highly unusual circumstances following the death of boys’ and girls’ coach Jerome Chung in March 2021, it is common for some  teams, including girls’ basketball and girls’ volleyball, to undergo similar issues with constant leadership changes. Both have had three new coaches in the past three consecutive seasons.

“I think it’s not the best to have different coaches every year because you don’t know how they’re going to act and how experienced they are,” said junior Emily Lu, a libero on the girls’ varsity volleyball team. “There’s always a period in the beginning of the season where you’re adjusting to the new coaching style.”

The frequent shifts in coaching mainly occur because of a hiring process in which coaches are committed to one season at a time, athletics director Rick Ellis said. “If the coach and myself both agree that moving on to the next season is a good thing, then we will keep them on. We want consistency that way,” Ellis said.

The coach hiring process begins with candidates meeting with Ellis for an interview; later he checks references, a process similar to other jobs.

Ellis looks for someone who has prior experience both playing and coaching the sport at a secondary school level. Ellis asks applicants without coaching experience about their personal experiences with the sport, leadership skills, team management and communication abilities.

“Sometimes our questions revolve more around how they will manage a team, take care of discipline issues and communicate with parents,” Ellis said. “If [coaches] have those kinds of skills, we can work on the details.”

The next step in the process involves a newly hired coach taking human resource training sessions, getting CPR and first aid certifications, tuberculosis testing, fingerprinting and online classes regarding sexual harassment, among other hurdles.

Generally, however, the trouble with coaches does not arise through the hiring process, but rather from the reality that there are few coaches available.

“It’s difficult to find coaches,” Ellis said. “I think there might be a misconception in our community that there is an abundance of people who want to coach here, but in my 21 years here, that is not the case.”

According to Ellis, the search for coaches has been difficult, especially for coaches qualified to coach at the high school level.

“We were able to hire new coaches fairly successfully, but we were lucky,” Ellis said. “There weren’t a lot of people at all who applied.”

Another factor that contributes to coaching changes is the salary for coaches and the high living costs of the Bay Area. For example, the departure of girls’ basketball coach Jaclyn Brode was influenced by her JV coach moving out of the Bay Area and a job offer from Castilleja, a private school that offered a higher-paying position.

The average salary for a new coach per sports season here ranges from $2,289 to $3,720 depending on the category the coaching position is designated to and their years of experience. The most experienced coaches in some sports  earn just over $5,000 in a season.

Additionally, the COVID-19 pandemic made hiring even more challenging, with more coaches departing in sports like girls’ volleyball, girls’ basketball and boys’ and girls’ water polo.

Despite the coaching departures following the pandemic, Ellis said the number of applicants remained relatively unchanged from previous years. Coaching applicants also vary based on the sport, with more popular sports like football, baseball and basketball having larger applicant pools in contrast with the small pool for less popular sports like lacrosse and water polo.

Said Ellis: “We were lucky to find coach Michael Fleming [for water polo]. The other applicant was actually Mexico’s national coach, who was way overqualified for the position. I don’t think he was fully aware of the level he would be coaching at if he came here.” In terms of qualifications, coaches must have completed their high school education, but are not required to have any prior experience coaching the sport or even coaching at all.

Due to these benchmark requirements, student athletes sometimes find themselves having different coaches with varying skill sets across multiple seasons, which leads to discouragement and discord among teams.

“I think our coaches from the past three seasons have been pretty inexperienced,” said Lu about her volleyball experience. “We have a strong team with experienced players and I don’t think we are reaching our full potential with these constant changes.”