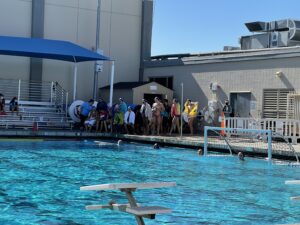 The SHS boys' water polo team gets into the pool and prepares for an upcoming game against Lynbrook High School on May 13 in honor of former coach Jerome Chung.

After the passing of former coach Jerome Chung on March 4, players on both teams pay homage to his mentorship and rally together

As the reopening of sports began earlier this semester, members of the boys’ and girls’ water polo teams were excited to soon be back in the water. A month before official practices were set to resume, however, the players found themselves dealing with the unimaginable.

Their longtime coach Jerome Chung, passed away unexpectedly on March 4 at age 37.

Chung first began coaching at the school in 2016. During his time here, he led athletes to become stronger players. In the 2018-2019 season, he led the girls’ team to second place in CCS, and the boys to league co-championships in the 2019-2020 season.

Chung was a beloved figure among the players on both teams, changing their lives in many different ways both in and out of the pool.

“I knew Jerome for about six years and I met him through my sister (Class of 2019 alumna Maddie Stuart) when she used to play water polo at Saratoga,” senior Grace Stuart said. “Once I entered high school, I knew I wanted to join the water polo team. He was an important parental figure in my life, and encouraged me throughout last season to play water polo in college.”

Players described Chung as encouraging, uplifting and always full of energy and wit. He constantly pushed athletes to do their best, whether it be through tough love or humor.

“Jerome loved to joke around with us while we were conditioning,” junior Morgan Bettinger said. “Whether he was roasting our techniques or cracking his famous Korean BBQ jokes, there was not a single practice where I didn’t laugh.”

Following this tragedy, the future of the season appeared uncertain. But with special education teacher Courtney Crase-Delp, a former SHS water polo player and coach stepping in, both teams were able to start their seasons in early April as planned, and she coached them the rest of the year.

Despite the chaotic events, players were able to adapt.

“Coach Crase has been super positive going into this season, which has made the transition a lot more comfortable,” Bettinger said. “We have a lot of new players, and are having to deal with COVID, so her patience has been really key, especially at the beginning.”

Senior goalie Dylan Overby appreciated the efforts of Crase and cited the shift in team dynamic in the weeks following Chung’s passing.

“Jerome was a great coach and really was able to push us to our limits at times,” Overby said. “As a person, he was really nice and fun to talk to; it’s hard to think the guy yelling at us on the pool deck was the same person. Our teams used the news as a rallying point and we were especially determined to win. But personally, I think it is painfully obvious that we aren't playing as well as last year.”

Overby noted the less cohesive offensive and passing technique as areas to improve on as the season draws to a close. Nevertheless, he and the other members of the boys’ water polo team are determined to end on a strong note by both paying homage to Chung’s work ethic and spirit and following COVID-19 guidelines to ensure a fulfilling season.

After months of adapting to COVID-19 restrictions and executing safe workouts and practices, the diligence the teams have put forth has paid off. With cohorts, limited physical contact, and brief quarantining at the beginning of their respective seasons, players from the two teams have been able to carry out a successful season with zero cases as of May 12.

“I think we adapted quite well to the COVID-19 restrictions and there are no particular restrictions that apply to water polo players anymore,” Overby said. “[To continue boosting team morale despite our current situation], we certainly plan on having a senior day as well as a get-together after the season.”

As the seasons reach their climax, the boys’ team in particular is hoping for a satisfactory finish in their upcoming meet against longtime rival Los Gatos on May 24, while all are gearing up for the concluding conference games.

In light of a shortened season ending on May 27, the main focus for all players has ultimately been to honor Chung’s legacy as a coach and mentor.

“This season we really just want to get out there and play the game the best that we can,” Bettinger said. “I think the best way we can honor Jerome this season is to just do our best. He really believed in us, and now we have the chance to prove him right.”