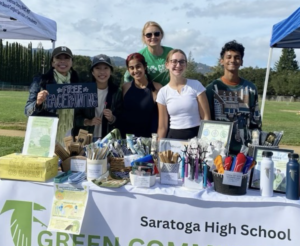 Last summer, recent graduate Cici Xu and a few parents founded the Green Committee after being frustrated by the lack of progress toward sustainability at the school.

The committee is notably separate from the Green Team, a club that has existed for many years and works on making the school  greener by volunteering, hosting group hikes and working on environmental projects.

According to senior Carolyn Pyun, the committee’s chairman, the school and administration have consistently supported their efforts.

“The district has been super receptive,” Pyun said. “We met with the superintendent in November, and he was really on board with our hope to make Saratoga more eco-friendly, such as by stopping the use of plastic bottles at our school.”

“It’s hard to get high schoolers motivated about things they don’t usually think about,” Pyun said. “But we’re trying and I think the effort is really what counts.”

One way they try to get students involved is by selling reusable products such as metal straws and reusable utensil sets, which they hope can help replace the single-use plastic forks in the cafeteria. These items can be bought online and all proceeds go to buying the school’s new three-way bins, which Pyun hopes will encourage students to properly sort their trash.

Currently, the committee is working with West Valley Collection & Recycling to add composting to the school, and they are currently trying the system with the cafeteria. This system is supported by superintendent Bill Sanderson, who hopes Saratoga High can follow his previous schools’ footsteps in using compostable utensils in the cafeteria.

They are also trying to educate students on proper waste management, as during the recycling competition, many recycling bins were contaminated by trash, which meant entire bins could not be recycled.

Pyun recommends a few actions for students, staff and parents to help support the committee.

“It would be great if more people could order from our online shop, especially because daily habits like not using plastic utensils can really make an impact,” Pyun said. “Additionally, if you have any feedback, please DM us on Instagram, as we’re really active. You can also participate in both our Green Committee meetings and Green Team meetings to get more involved.”