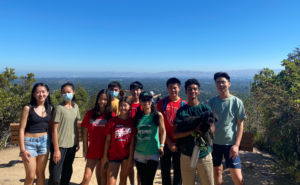 Photo by Jessica Liu
Members of the Green Committee embark on a team bonding hike at Montalvo.

Permalink
In a collaboration between students, parents, alumni and administrators, the green committee is striving toward a better future for the school.

As carbon emissions have continued to rise and environmental damage worsen, some students are attempting to bring the campus’s reputation for sustainability on par with its academic excellence.

After trying to work on these goals through the ASB club Green Team and feeling the school did not achieve enough of its goals, Class of 2022 alumna Cici Xu spent time over the summer restructuring the Green Team before she left for college. She received support from both her AP English Literature teacher, Suzanne Herzman, and the administration to set her goals into motion.

Xu and parent Jessica Liu founded the new Green Committee to help reduce the school’s carbon emissions and make the school more environmentally friendly. The committee is independent from ASB, but still works closely with the administration and student government leaders.

The committee has a variety of subcommittees focused on different aspects of sustainability: reducing paper use on campus, increasing recycling, adding climate curriculum, reducing use of plastic water bottles, increasing composting, reducing water waste, reducing electrical usage and adding solar panels. Each subcommittee, headed by a captain who organizes meetings and delegates tasks, holds a meeting at least once a month to discuss issues and progress.

The committee started accepting applications at the beginning of summer, receiving over 40 applications. Twenty students were admitted, with junior Avik Belenje helping run the committee and senior Julian Berkowitz-Sklar acting as the ASB liaison. The committee plans to work alongside the administration in their plans to bring positive environmental change.

The school’s current benchmark for measuring their progress is to win the Green Ribbon, an award gifted to schools for environmental excellence by the U.S. Department of Education.

“There’s multiple things that we want to get done,” said Belenje, also the captain of the solar panels subcommittee. “If we get the Green Ribbon award, it means that we have almost all of the things that we’re interested in.”

Nominations for the Green Award are handled by the state, which outlines a series of goals for schools, including “reducing environmental impact and costs,” “improving the health and wellness of schools, students, and staff” and “providing effective environmental education, which teaches many disciplines.”

The first priority for the committee is the installation of solar panels. While previous efforts for solar have failed at the school, the five-member district governing board has decided to hear a proposal on the project in the coming weeks.

Additionally, the committee is working on improving the waste management system, hoping to introduce a three-way trash can throughout the school: composting, recycling, and landfill. They have already partnered with West Valley College, who will receive the compost, and utilize it for gardening.

The committee seeks to resolve numerous problems within and beyond our campus, but Xu, now a freshman at Yale University, is confident the team will carry out their climate initiatives despite being fairly new to campus.

“I feel like this is a leap that we must take in order to fully respond to what’s happening in our society, and our communities and our surrounding markets are changing so rapidly and I feel like if we don’t respond to it right now, we won’t respond at all,” Xu said.