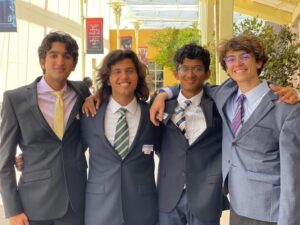 As junior Stephanie Sun walked into the SHS library on March 13, she was all nerves; earlier that day, she and her group participated in the exhibit portion of Santa Clara’s National History Day (NHD) county competitions. Though Sun was confident in her group and their project, she was nervous about whether her team would beat the other teams competing in exhibits and qualify to state.

When her team was called on stage for winning an award, she was both shocked and excited to continue her journey as one of the 60 APUSH students whose groups advanced to the NHD State Finals that were held on May 7 at William Jessup University in Rocklin.

This year’s theme was Debate and Diplomacy in History, focusing on historical successes, failures and consequences.

NHD Nationals this year will be held virtually on June 16. In many previous non-pandemic years, around 3,000 national finalists from all 50 states and international schools in countries such as China and South Korea, would travel to the University of Maryland, College Park for the entire week.

“At this point in time, everyone is hoping this is the last virtual one,” APUSH teacher Faith Daly said. “Hopefully next year, we can go back to meeting up in College Park, Maryland, doing all of the DC events.”

Daly, who has been judging NHD on and off since 1996, was a judge for the performance and podcast category this year. According to Daly, NHD is judged by historians, librarians, college professors and many of the teachers who bring students to the competition.

As a past NHD participant, Daly said she even recognized judges and interviewees at NHD state who had been judging since she was a high schooler participating in the contest herself.

Juniors Rosalee Kline, Ananya Seth, Stephanie Sun and Lily Zhang went to state finals with their exhibit exploring the life story behind Mabel Ping-Hua Lee, a Chinese immigrant and U.S. suffragist. Although junior Lily Zhang initially did the project only because it was an assignment, overtime, she began to look forward to working on her exhibit.

“Despite the difficulties in researching and getting times in all of our schedules to match, I really enjoyed meeting up with my group and constructing the board,” she said.

This year’s state finals was also the first introduction of the Civic Summit where NHD worked with the California State Seal of Civic Engagement. Though the Civic Summit this year was for the senior division only, Daly said they are hoping to expand it out to other divisions.

The summit began with writer Antonio White, who authored the book “Close With Your Open,” lecturing how to be concise and engage the audience when pitching something.

Junior Andrew Hong was one of the many students who participated in the event. In the event, he said the students would do multiple presentation activities such as trying to convince the audience why your historical topic was most interesting and unique.

While this year’s state finals and Civic Summit was done in person, there were many other states and counties that went through the contest online due to COVID-19.

“I have sent papers, websites, documentaries and stuff to Nationals, but it’s been hard convincing students to do performance,” she said. “[In the past], I’ve had students that have gotten close with runner ups and honorable mentions in performance, so I’m excited to be able to take my students in the same division that I competed in.”