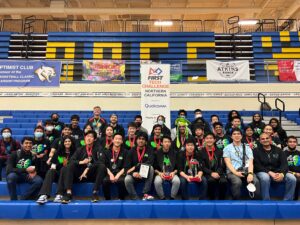 Photo by Gavin Chang
MSET Cuttlefish members pose for a team photo at their Maryland Tech Invitational during the 2020-2021 season.

Chang, the current MSET Club Treasurer, said robotics was one of the most enriching extracurriculars he pursued. By exploring various aspects such as hardware, software, management and outreach, he gained versatile technical and non-technical acumen: computer aided design (CAD) prototyping, operating complex machinery, marketing team branding for a team portfolio and finding ways to apply what he’s learned to outreach.

“Over my four years, I learned how to basically run a startup company,” Chang said. “Most importantly, I learned how to serve as a student representative for MSET and delegate work to younger members, teaching them to sustain MSET for future generations.”

These feats came with challenges, however. One of his most harrowing robotics experiences was in his junior year when his team decided to remake the team’s entire robot for an off-season competition, the Maryland Tech Invitational. By doing so, they barely had any time to test and optimize the robot, according to Chang.

“At the venue, our team was plagued with both software and hardware issues and many of us were disappointed because our robot didn’t reach its full potential,” he said.

Although setbacks such as these were difficult to work through, Chang said that these experiences taught his team several valuable lessons and helped him develop a growth mindset.

“I appreciate that FIRST emphasizes that winning in a robot game is not the most important factor of the program. Instead, Gracious Professionalism and Coopertition are stressed to create a positive atmosphere for growth and curiosity, rather than hostile competition all the time,” Chang said. Coopertition is a term coined by the robotics community.

He leveraged those values for this year’s season, where Cuttlefish qualified for the World Championships in Houston by winning the Inspire Award at their regional.

“I was very excited to go to Houston as that was one of my top goals to achieve before I graduated from the program,” Chang said. “Going there, I felt confident and excited, knowing that our robot had a strong ability to compete with other robots. It was definitely an honor to be an Inspire Award Finalist, given the number of competitive teams coming from across the world.”

Going into her junior year, Minocha didn’t have much electronics experience as COVID-19 had shut down her sophomore year season, but she was the most qualified member to run for the position, as many upperclassmen had graduated. When she received the position, she said she faced a steep learning curve.

“I was essentially learning how to do my job last year,” Minocha said. “ COVID-19 helped us rebuild our team, which was majority underclassmen.”

This year, Minocha added that she’s utilized her technical knowledge and leadership skills to “be a good teacher” for her electronics team. Minocha said that she will continue to use the skills she’s developed in MSET in future team environments.

Chang also said that he can see himself taking the skills he’s learned in robotics with him in the future.

“The dedication of all my mentors and many of their children] to fostering future engineers in the MSET program inspired me to learn as much as I can over my four years in the program,” Chang said. “Though I will miss my teammates, who I’ve been able to bond with over our struggles and successes as a team, I am excited to see how I can use my learnings in college and beyond.”