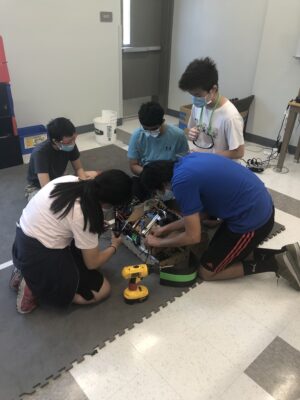 Photo by Andy Chen
Rookie members of team MSET 6165 Cuttlefish work on the finishing touches of their robot together in the robotics room before their scrimmage.

Even though the 2019-2020 robotics season abruptly ended due to the pandemic, the school’s robotics team, MSET, quickly bounced back and reassessed its strategies for the 2020-2021 remote season. These strategies clearly worked, as all three of their FIRST Tech Challenge (FTC) teams went on to qualify for the Northern California FTC Regionals Championship in May.

One of their FTC teams, 6165 MSET Cuttlefish, advanced to rank first in the championship, resulting in a summer invitation to one of the most prestigious competitions in the nation, the Maryland Tech Invitational (MTI). SHS alumna Riya Jain, seniors Gavin Chang, Allen Luo, Ayush Raman, and Joseph Zhang, along with junior Matthew Song attended the competition.

FTC prepares for and competes in Maryland Tech Invitational

Raman and his team, 6165 MSET Cuttlefish, piled out of their plane that had just landed early in the morning in Baltimore, Md. They arrived to compete in the prestigious MTI on July 31. The team was ecstatic to present their robot in-person for the first time in over a year.

“It’s the best; we’d gotten to see other people and the FTC community,” Raman said. “Competing in person after a year is very exciting.”

Early in the summer, the team started brainstorming and adapting their robot for the in-person competition. Eventually, they decided to design and build an entirely new robot from scratch, using their old one — the one they used to win NorCal Regionals — as a backup. Raman and his teammates began spending 15 hours a week or more in the cramped robotics room to perfect their robot in preparation for the tournament.

“We spent weeks leading up to MTI debugging a lot of stuff and working on autonomous tuning,” Raman said. “It was overall very hectic since we didn’t have much time to complete everything.”

Throughout the next two months, the team developed and executed several unique ideas, such as a turret shooter which would aim at the goal no matter where it was on the field.

Despite only having little over a month to prepare for MTI, the members were able to design, build and program an entirely new robot with innovative designs and unique competitive edges.

The team didn’t qualify for the final round of MTI — which Raman said was disappointing considering the effort they put in. However, Raman and his team believe that the preparations leading up to the event included valuable experiences and mistakes that they can learn for the upcoming season.

Raman and his team said they relished competing in person and meeting other members of the FTC community after over a year of pandemic-affected isolation.

“We’re a lot smarter and more efficient than we were last season,” Raman said. “We’re certain that in-person competitions are getting better too, so I think we’re just ready for a good competition for us to crush.”

New members of the Cuttlefish prepares for the upcoming season

While the seasoned members of the Cuttlefish FTC team were working tirelessly for MTI, the rookie members, who were invited to join the veteran Cuttlefish after the previous season ended, were slowly getting used to the pace of a top-ranking team over the summer.

In order to assimilate to the fast pace of the Cuttlefish team, sophomore Rushil Saraf participated in summer training organized by MSET that helped him familiarize himself with more advanced tools and software he would use when the season starts.

Saraf and four other rookies were challenged to assemble a robot in two months (three to four months less than a regular season for rookies) to prepare for a scrimmage which was ultimately canceled.

“It definitely felt intimidating at first, but we got right into work and started designing and CAD-ing (computer-aided design) parts on the robot with the help of a few veteran members on the team,” Saraf said.

However, progress was slow as many of the members were not yet experienced with the building and design process to create robot parts. The team also ran into many technical problems, such as the lack of materials and the slow, grueling process of printing and laser cutting custom parts.

Despite the challenges, Saraf believes that he was able to increase his confidence in designing and become more familiar with the gist of robotics.

“I think I gained a lot more experience since I was able to make more mistakes and learn how to solve them,” Saraf said. “I think we have a lot of potential as a team, and I can’t wait to contribute and give it my all during build sessions and competition in future seasons.”

The other end of MSET’s robotics team is the FIRST Robotics Challenge team, or FRC. They continued to prepare for the Cal Games tournament hosted by the Western Region Robotics Forum in Lynbrook High School from Oct. 1-3. In addition, they are also participating in the Chezy Champs tournament hosted by FRC team 254 from Oct. 30-31 at Bellarmine College Preparatory.

During the pandemic, the team had to record the robot performing challenges for judging; however, this year’s in-person tournament enables live competition with other teams and many more challenges for the team to solve.

For example, the team must consider challenges such as climbing onto a platform and balancing with other robots, as well as having a much bigger field to compete on since the field will now host six robots instead of just one.

FRC team lead Sajiv Shah said most of their work during the summer involved training new members and getting experienced members to work on added features, such as their vision system, to detect and accurately align the shooter to the goal. Because of the larger field, the team now must figure out where the robot is on the new field, so they added features for sensing.

For many members in robotics, in-person tournaments have ignited a renewed interest in robotics since it has helped MSET as a team create new friendships with other teams under robotics. They are excited to kick off the new season strong and push through the new and unique challenges presented by in-person competitions.

“We have a lot of relationships with teams from states like Texas that we get to meet at these competitions that we don’t normally see,” Shah said. “It’ll be awesome to meet them again and finally compete together.”