Boys’ soccer encounters hiccups but gears up for a comeback

After dropping into the El Camino league, the Falcons began their season with an electric 2-0 victory against rival Los Gatos on Dec. 15. Since then, however, the Falcons have stumbled in the first half of the league season, achieving a 2-3-2 record as of Jan. 25.  The Falcons tied 0-0 in their game on […]

This season, the girls’ basketball team has seen varsity and JV merge due to the loss of four seniors early in the season and the departures of JV coaches Ellyson Matsui and Vernon Wang, who left for personal reasons mid-season. Both teams are now led by head coach Josh Rivera and assistant coach Jaston Rivera. […] 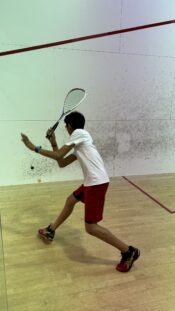 For some, the word squash brings to mind pictures of a bland vegetable. Yet for juniors Neal Malhotra and Dhruv Nemani, it carries an entirely different meaning: a sport, a family and a lifestyle. Characterized by its lightning fast nature and technical movements, the indoor racket sport consists of two players hitting a tennis-like ball […]

The air was electric with four minutes left on the scoreboard in the Falcons’ home game against the Gunn Titans on Jan. 13. The Falcons were down 52-50. Attempting to score, senior point guard Nick Tjaden hovered at the 3-point line but couldn’t find an opening. Suddenly, senior shooting guard Julian Berkowitz-Sklar appeared next to […]

Physics teacher Matthew Welander teaches high-level science classes that demand thorough preparation and deep concentration. But his work days begin in a place not typically associated with the concepts he teaches: a local gym. He spends most mornings in the gym from 6 a.m. to 7 a.m., and he credits his workouts with helping him […]

With the new semester in full swing, the dance team has transitioned into its competition season, a time when they attend local contests across the Bay Area and then head to Nationals in Anaheim.  In the past few years, the team has struggled with a lack of leadership and choreography due to difficulties finding consistent […]

Just a week after the ending of a mesmerizing World Cup, where Lionel Messi and Argentina triumphed against superstar Kylian Mbappe’s France in a nerve-wracking back-and-forth affair, soccer’s biggest stars swapped their nation’s colors for their club stripes.  The English Premier League, which returned to action on Dec. 26, is regarded as the best domestic […]

While many sports like soccer and basketball involve teamwork among players, golf is one of the few that mainly focuses on individual improvement and practice. Sophomore Sarah Lim has played golf for four years, and practices three to four hours most days at San Jose University Spartan Complex. Along with holding the No. 1 position […]

The dance team will be busier during its competition season this year, ramping up their practice for six competition pieces this year compared to three last year.  They are all either in the medium or small dance category since the team only has 15 members. Among the six competitions, medium hip-pop, medium pom and medium […]

read more »
How to start lifting

Jan. 1 is fast approaching, and you know what that means: hordes of clueless people walking into the gym for the first time, a majority of whom will never be seen again within five miles of a weight. If you’re truly in it to win it, here’s how to make real progress and avoid common […]