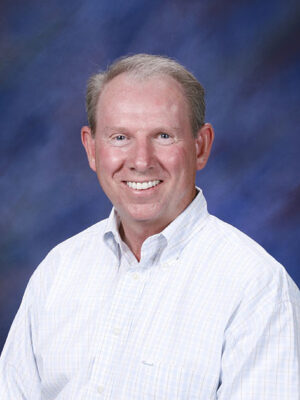 Yowell, who has been teaching at Saratoga High for five years, has worked hard to build a positive atmosphere toward students and other staff members. His greatest goal is to encourage his students to return to the music program each year and also consider music as part of their futures.

“I like to have the approval of my students and colleagues,” said Yowell. “Otherwise, I never know how I’m doing as a teacher. I want my students to love what they’re doing and to be confident.”

At the end of each year, the Los Gatos or Saratoga faculty selects one teacher to receive this prestigious award, through a series of nominations. Yowell taught choir at two other high schools, Clovis West school and Aca’anes school, before teaching at Saratoga. His interest in choir stems from the influence of his family and grandparents.

“I was greatly influenced by my parents and grandparents because they were all great singers and my grandmother used to be the choir teacher at University of Wisconsin,” said Yowell. “When I grew up, my parents, grandparents, cousins and I all lived in the same house and we all sang so it just seemed natural.”

Because Yowell grew up singing with his family, he was surprised when his teachers considered him a talented singer and encouraged him to pursue his natural gift.

“Whenever our family went on trips, we would sing in the car and it just seemed natural to do harmonies so I never thought that it was anything special or unique,” said Yowell. “I got great music teachers throughout junior high, high school and college who were patient with me because I was really shy and rarely stood out, but they made me feel like I was loved.”

Yowell’s students and colleagues feel that the faculty’s choice to name him Teacher of the Year was well-founded.

“Mr. Yowell definitely deserves this award, and he’s such a great teacher,” said junior Chris Rea. “He does a good job making everyone feel welcome, and he
pushes everyone to do their best.”

Yowell has offered many opportunities for students to become involved in the music program. For instance, he conducts four different choir groups as well as the AP Music Theory class. In addition, he hosts informal groups such as Men’s Choir during lunch and holds voice lessons at De Anza College at night.

“I like to see my students extend themselves more,” said Yowell. “For example, the musical West Side Story was a good testament that students are willing to go beyond themselves into a make-believe world, and that’s what I like to see.”

Because Yowell believes that students find it easier to learn in a positive atmosphere, he likes to pick inspirational pieces for his students to sing.

“I want them to feel the emotion [of the piece],” said Yowell. “Many of the songs convey strong emotions, such as love, friendship, or hate.”

Yowell said the thing he enjoys most about teaching is that it challenges him to be a better person every day and makes his life “more meaningful.”

“I didn’t always know that I was going to become a teacher,” said Yowell. “But I definitely wanted to be like my teachers because I saw such great qualities in them.”