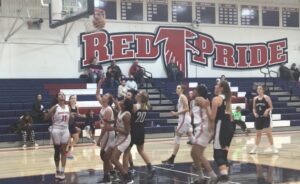 Photo by Victoria Hu
The Falcons play against Aptos on Dec. 5.

Since kicking off their season with their first game during Thanksgiving week, the Falcons have a 3-2 preseason record as of Dec. 8. But many challenges lie ahead with a short bench and only eight players.

Point guard Tanya Ghai, the team’s senior captain, was also nominated for the Bay Area News Group’s Athlete of the Week poll due to her outstanding performance in the Falcons’ win over Valley Christian, where she scored 35 points and helped anchor the team’s defense with three steals and two blocks. So far, this season, she is averaging a remarkable 31 points per game.

Ghai attributes the team’s early wins to their overall increased motivation following last year’s defeats and the players’ adjustment to the coaching style of coach Josh Rivera. Though they lost against Valley Christian in last year’s season opener, they emerged victorious even as the underdogs this season.

“We’re more comfortable with each other and with our coaching and we trust each other, so I think that chemistry between us is already built,” Ghai said. “Now it’s just really about basketball.”

However, following the loss of other star players such as senior shooting guard Jenny Campbell, senior forward Mika Tippetts and senior center Lily Guzman in November, the team is now severely short-staffed. Out of the eight remaining players, Ghai is the only senior. The other starters are juniors Zineerah Ahmed and Priyanka Chopra as well as sophomores Urvi Iyer and Riley Adler.

Campbell said that she, Tippetts and Guzman made the difficult decision to prioritize their other sports commitments — ice hockey for Campbell, color guard for Tippetts and softball for Guzaman. Campbell found it necessary to allow her body to recover between back-to-back mid-November hockey tournaments in Pennsylvania and San Diego, as she recalls feeling exhausted and lightheaded. Additionally, practices and games during the basketball season conflict with 10 of her hockey games.

“All I needed to do was rest and I couldn’t really do that if I played basketball because I’d be missing a lot,” she said. “I would miss our entire hockey league season, and it just wouldn’t have been worth it.”

With only three bench players behind the five starters, Falcon players will need to play longer minutes, and will require more stamina.

As a result, the team is keeping an intensive training schedule, practicing six days a week from Monday to Saturday from 5:15 to 8 p.m.

“Our morale is pretty good. Though we’re low on players, we just realized that we will play with what we have right now,” Ahmed said. “We have to hold each other accountable and stick together as a team.”

During practice, the team focuses on defensive drills such as “shell drill” where players try to keep the ball away from the net. They also carry out plays, practice free throws and run shooting drills. Scrimmages at the end of practices usually emphasize competing, techniques, teamwork and communication.

“We’re trying to improve on getting everyone to contribute and be involved in a play, working around the ball to really be a team on the court,” Ahmed said. “Even if you’re a guard, having everyone connected is just that chemistry we need.”

Going forward, Ahmed is hopeful for the team to find success during their league season, which begins on Dec. 15 with their first league game against Los Altos.

“We have high hopes for our league games, but it’s going to be difficult,” Ahmed said. “But I think at the pace we’re going right now after these two wins, it’s improved my confidence with the season and I’m just really excited to see how far we’ve come and what else is in the future.”