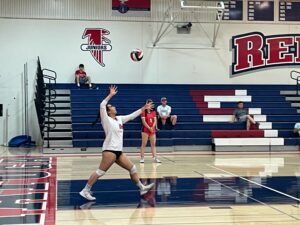 Photo by Divya Vadlakonda
Senior Noor Khan serves during a game against King’s Academy on Sept. 7.

Permalink
With some injuries and two players leaving, players look to increase familiarity with teammates.

Recap: The Falcons fell on hard times last year. Players attributed the losing season to a lack of team chemistry and struggles adjustmenting to a new coach..

Key losses to graduation: None

Hoping to rebound from last year’s disappointments, the girls’ volleyball team started out their season with the news that two varsity players, sophomore Dahlia Murthy and junior Natalie Chua, would not be returning.

However, the rest of the team remains intact due to the lack of graduating players. Additionally, seven out of the 12 players on the team this year are seniors, giving the team strong leadership.

Despite positions staying relatively unchanged this year, their on-court team dynamic has hit some rough patches, with practices being inconsistent and awkward due to switches in positions.

“Our team’s chemistry is questionable sometimes,” sophomore Emmy Pak said. “Some people are closer friends with some than others, and you can tell that on the court with how we play and our overall energy.”

Even so, the Falcons started their season with a 3-0 win against Prospect, but troubles continued after two key players — seniors Joanna Song and Lisa Fung — were injured with knee and hand injuries, respectively. With both Fung and Song contributing a large number of the team’s points, the injuries were a big blow to the team’s dynamic on court.

However, players are striving to improve with the help of Fung and other senior co-captains Noor Khan and Maaheen Khericha. While always giving their full effort, they act as role models and encourage players to try their best, boosting everyone’s spirits while also working on the team’s goal of bonding and forming connections with one another to become close both on and off the court.

“Although we have our own set of challenges, playing with the team is really fun and I love talking to everyone,” Pak said. “We have many seniors this year, so we really need to make this year count. I’m super excited to see what happens.”