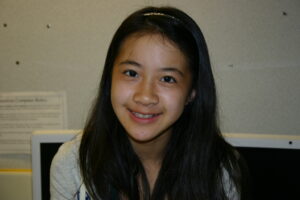 Forget about being part of Generation X, Y, or Z. What this generation of kids should really be called is the E-Generation. Look around while eating in a restaurant, and you’ll see that this is true. Instead of sharing stories about their day, which is how dinner should be, teenagers text their friends incessantly, toddlers play games on iTouches, and parents check their Blackberrys for new e-mails. With the wave of new technology and gadgets, people of all ages, one by one, have forgotten how life used to be before all the electronics. Remember when the word “text” meant the wording in a printed document, and iPods didn’t even exist? Most people my age can’t.

With countless ways to communicate, kids these days have forgotten the most simple way to talk to each other: face to face. Even calling has become an ancient form of communication. When I want to discuss a difficult math problem or ask you a question that I believe would be too awkward in person, I’ll just shoot you a text or chat with you. Kids just a generation ago didn’t have this luxury, and for the better, I believe. In the long term, how will communicating solely through the argot of typing on a keypad benefit us?

We’ll forget how to speak properly and how to ask important questions that are bothering us in person. It may be just me, but sometimes I feel a strong urge to say “IDK” or “BRB” when I’m hanging out with friends. Thankfully, I catch myself in time. But the point is, not talking to people directly isn’t helping our future. People need to have conversations with each other face to face, no matter how strange or uncomfortable the topic.

Another thing that bothers me to no end is the lack of etiquette electronics have brought on. I especially dislike it when I’m with a friend, and in the middle of our conversation, she’ll just pull out her phone and start texting. Even if she’s still listening and talking while typing, I find it rude, almost like a snub. Maybe I’m just overly sensitive, so I could be the only one that feels shunned whenever someone starts texting in front of me. As for me, I was able to text starting from only two months ago. My parents were worried for the longest time that I would become unfocused and turn into a texting machine. While this hasn’t happened (yet), I have had to practice my self-control in a major way by refraining myself from replying immediately every time a new message pops up.

I’ll admit, I could never live without technology, like my cell phone or laptop. Just the thought of having to go to a library to research something instead of just “Googling” it makes me shudder. All I’m saying is, it wouldn’t hurt to go back to the old-fashioned way once in a while. So put away that cell phone, and let’s talk in person!