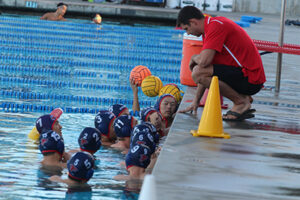 When varsity boys’ water polo coach Jacob Young jumped into the pool for the first time after he started coaching last year, senior wing Nathon Chin, not used to such interactive coaching, was shocked.

Young, who grew up in Saratoga and went to Valley Christian High in San Jose, began coaching the team last year.

Chin is a fan of Young’s coaching style in which players are allowed to have fun at practices, and the atmosphere is not restrictive or harsh.

“He knows a lot about the game and how to run drills,” Chin said. “He knows how we can get stronger. He teaches one-on-one to shows us how to play.”

Chin added that Young often scrimmages against their team, allowing the players to follow his example and “motivating them to play smart.”

“Usually, when I see other teams, they have older coaches who just yell from the side of the pool,” Chin said. “But with Jacob, since he’s younger and we can connect with him more, he’s just a cooler coach to have.”

For Young, water polo has been a long-time passion. He started playing during his freshman year at Valley Christian and continued throughout college at Pepperdine University. He then started his coaching career in 2008 at the Terry Schroeder Olympic Camps in Malibu.

Young even started playing professionally in 2011, when he spent one year as a member of the Brisbane Barracudas in Australia. Later, he played all around the world and coached in every country that he has played for as a side job. Coaching children around ages 10 to 16 is a requirement for most professional clubs, so Young was able to develop his style.

These days, however, Young no longer plays professionally, but he is on amateur teams. For example, this summer he attended the 2017 World Championships, hosted by aquatic sports authority FINA (Fédération Internationale de Natation, or International Swimming Federation in English), in Budapest, Hungary.

At the championships, Young played with the Los Gatos based team Bay Area Masters. He played teams from countries all around the world, such as Serbia, Croatia, Russia, China and Brazil.

“It was the coolest thing I’ve ever been to and the best atmosphere to play water polo,” Young said. “It didn’t really mean anything; it’s just for bragging rights.”

“Now we’re working on working together as a team,” Gao said. “We’re coming together really well.”

With Young as their coach, the team currently holds a record of 1-3. They play Fremont in an away game on Sept. 19.