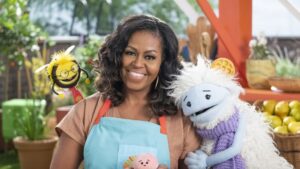 “Listen to your vegetables and eat your parents with Waffles and Mochi!”

As the intro song to the Netflix show “Waffles and Mochi” started playing, I was intrigued by the brilliant animation, voiceovers and innovative structure of a show that encourages children to learn about different culinary lessons on basic fresh ingredients.

On March 16, “Waffles and Mochi” aired its first season, consisting of 10 episodes, each covering an ingredient in only 20 to 30 minutes. The show does a brilliant job of engaging its audience while providing a lot of information in short episodes. Viewers get to visit places like Peru and Japan, while experiencing different cuisines, with an emphasis on the diversity of cultures and cuisines.

The creativity of the series is showcased by the fairytale-like setting and the unique personalities of the characters. The two main characters are named in the show’s title: Waffles is a half waffle, half yeti puppet, and Mochi is a non-verbal but emotive Japanese dessert puppet. Former first lady Michelle Obama, known as Mrs. O in the series, is also the executive producer and a primary character on the show. She is often shown chilling in a garden above a supermarket and giving Waffles and Mochi lessons about food that can be applied beyond cooking, such as trusting your intuition and being patient.

Moreover, the series embraces diversity, from listening to different opinions to showcasing a restaurant with staff with disabilities. This theme is first demonstrated in the first episode where the focus is on the tomato and the controversy of whether it is a fruit or a vegetable. Waffles and Mochi travel in their “mini-airplane” to a garden, where chef Samin Nosrat explains and demonstrates that a tomato is a fruit because it has seeds.

Then, the episode transitions to feature a restaurant, Mozzeria (the entire staff is deaf, and they use sign language to communicate). They make pizzas that use tomatoes as vegetables to demonstrate that tomatoes are multifunctional. By highlighting different examples and experiences, the show effectively teaches the lesson that people should venture out and experiment with different ways to use everyday items.

The series contains interesting facts and moral lessons that can inspire young children. In episode two, Waffles and Mochi explore salt and how to use it in moderation. The episode begins with Waffles and Mochi having to salt chocolate chip cookies that just came out of the oven. The recipe states “salt to taste,” which results in Waffles and Mochi pouring an entire bowl of salt over each cookie, leading them to explore ways to make the cookies less salty.

To find a solution, they go to the salt ponds in Peru to learn that salt is made there over several years while flowing in rivers and then being pounded on the ground. They also visit chef Bricia Lopez, a master of Mexican cuisine, who teaches them how to make mole, a dish that uses chocolate and salt. Lopez is able to show them that they need to use “just a pinch” of salt to add flavor.

Though the salt episode focuses on the concept of “too much of anything is too much,” I learned much more than that. I had never even heard about the Peruvian salt ponds, or how salt is made. Not to mention, I didn’t know that mole used chocolate and salt to achieve a savory taste. By interweaving these experiences, children are exposed to different ideas and cultures while enjoying themselves.

This show gave me nostalgia and took me back to my childhood of watching heartwarming shows like “Arthur” that consistently teach their viewers valuable lessons with engaging content at the same time.

Ultimately, “Waffles and Mochi” is a great find for children and teaches culinary concepts and life lessons in a fun and interactive way. So, if you have free time and want to look at amazing dishes, you may just want to give this a shot to re-experience your childhood in the culinary world.