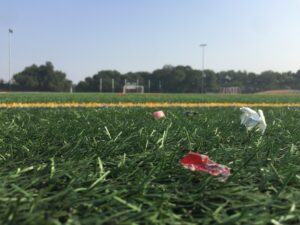 Student littering has led to the upper field being closed during Lunch.

The administration has closed the upper field during lunch due to students not cleaning up after themselves.

Because students have failed to clean up after themselves on the upper field, even after multiple efforts and warnings by the administration, principal Paul Robinson sent out an email on Oct. 18 to students and parents announcing the closing of the area during lunches.

“Our grounds crew placed additional trash cans and spoke with a number of students that they need to keep food and trash off of the field,” Robinson said in an email to the community. “[Even so,] the field was left with lollipops, food, candy and drinks that have actually damaged and discolored the field in spots beyond what the school can repair.”

Robinson said that after more students began to use the field this year, doing activities such as playing soccer or throwing footballs, the problem reached a “tipping point” where people weren’t cleaning after themselves.

After lunch periods, the upper field was filled with napkins and other trash.  As a result, sports teams had to pick up the trash during their practices in order to play on a clean field, and the littering problem became so bad that the custodians and athletic director Tim Lugo notified the administration.

The administration was forced to close down the field to keep it in good condition for sports teams, band and others, Robinson said.

Sophomore Shahmun Jafri wasn’t surprised when he heard the news because he has seen people litter constantly on the field. He said he once witnessed a student pour a bottle of apple juice all over the bleachers.

Robinson explained that in previous years, administrators and campus supervisors would just tell the students to pick up their trash, and they would do so consistently afterward. But this year was different because students continued to litter the field after multiple warnings.

Robinson also said the decision was not one he was happy to make.

“Ever since we finished that field, we’ve had it open,” Robinson said. “I love the fact that kids love to go up there and run around, throw frisbees and kick soccer balls. I encourage students to have that kind of freedom and de-stress by doing something active.”

Jafri enjoyed being on the field during lunch, mainly because “it was an open area compared to the quad, where it is crowded.” Jafri also liked that no staff members were on the field to “look over” the students.

So far, Robinson said that closing of the field during lunch has been effective in keeping the field clean and that the administration made the right decision, especially with soccer season starting.

Even so, Robinson said that there is a possibility of reopening the field later in the year if students who want to use the field have “a real commitment to really taking care of it.”

Jafri, however, said he doesn’t want the field to reopen because “most don’t pick up their trash anyways.”

“If students don't take their privileges seriously, they don't deserve them,” said Jafri. “The field closing down is a good example of that.”