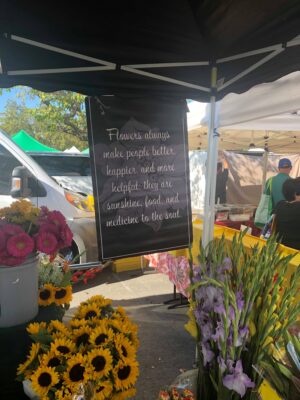 Taking a page from The New York Times “36 hours” series, I decided to explore the farmer’s market at West Valley College. I couldn’t spend 36 hours in an area like a typical New York Times reporter, but I figured out how to best spend two hours at one of Saratoga’s hidden treasures.

Every Saturday from 9 a.m. to 1 p.m., the farmer’s market at West Valley College offers a variety of bread, fruit, honey and other goodies to eager buyers. Although I’m not a usual farmers  market customer, I’m definitely not going to say no to spending the morning buying food, and as an added bonus, get some pretty VSCO pictures along the way. To get the full experience, I divided the journey into three different categories: food to eat, cute items to buy and eventful experiences to take in.

Food to Eat:
If you want one place where you could find practically any cuisine for any time of the day, then the Saratoga Farmers Market is the place for you.

Among other items, the market offers crepes, Mexican food, Nepalese food, coffee, lemonade and kettle popcorn (I know, my mouth started watering as well). The food has good value and there are many vegan and vegetarian options. For example, pies can range anywhere from $13 to $20. A vegan crepe is $6 and a vegetarian crepe is $11.

I finally decided on a vegetarian burrito. It maybe wasn’t the best decision considering it was 10:30 a.m., but really, who’s judging? Coming out to be $12, it was a tad expensive, but since it was very tasty — the perfect combination of rice, beans, vegetables, sour cream and guacamole — I would highly recommend it.

I started the morning by buying organic honey, which comes in either cute bear-shaped jars or Mason jars. The prices range from $4.95 for an 8oz jar to $19.75 for a 47oz jar. Apart from honey in jars, the booth also sells honey sticks and beeswax. A little tip: Even if you aren’t looking to buy honey, a few free samples will never hurt.

I then decided to wander around the aisles, looking at what the market had to offer. There were booths with every type of food imaginable, including beef, fish, fruits, vegetables, olive oil and hummus.

My funniest experience happened while I was at a grape and pomegranate stand. The sellers were in fact dressed in grape costumes, which surely drew customers to the booth. The grapes and pomegranates are grown by the sellers themselves, who come to the market only from July to November.

Above all, the most memorable experience happened at the Soaps of 7 Flowers stand. While talking to the owner, I was pleasantly surprised to find that her name was Yeun Byun, and she was a 2009 alumni of Saratoga High and was a photographer for the yearbook.

We began talking about the journalism program at Saratoga and how she was also taught and advised by Mr. Tyler during her years here. After graduating, she went on to study film and television in college and worked as a photographer for photoshoots on the side. She then started working on advertising in New York, but quickly felt that she wasn’t making a connection with her work.

It was inspiring listening to someone who truly believed she had her entire life figured out, and then realized she wanted something completely different out of life.

Byun decided to move back home and work as a floral designer, as she always had an affinity for nature and flowers.

She decided to work for a farm in Morgan Hill and use those flowers to start her soap business from her home in Santa Cruz. Her company hopes that people “let go of the seemingly concrete anxieties and learn to let nature embrace [them] for who [they] truly are.”

I loved hearing about their brand and how it promoted individuality and self-confidence.  The company sold six soaps, each being $7 and a half soap being $3.50. Byun also sells plates for $20, with the deal being $25 for a bar of soap and a plate together.

While the price of the product was definitely more expensive than something you would find at a Target or CVS, not only was the product of very high quality but also the empowering message behind the brand itself was one worth supporting.

Potential for such interactions with vendors and other visitors abound at the farmers market.  Although some items are pricey, listening to the messages behind the brands and stories of the owners gave me more than enough reason to buy the products they take so much pride in. Five out of five Falcons from me for the farmers market experience!