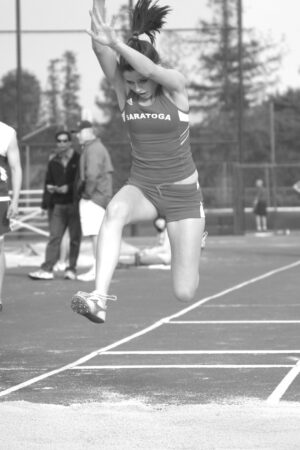 The boys ran strong, starting with junior Alan Menezes who placed seventh in the 1600m at 4:29.44, a tie for his PR. In the 400m, senior Mike Marshall broke through the epic 50-second barrier in an outstanding 49.48. Junior Kian Banks also turned in an impressive performance, taking second in the 800m with a PR of 1:58.17. Banks, Marshall and Menezes later teamed up with junior Tim Yen to race to a third place finish in the 4x400m relay with a time of 3:31.76. The team qualified for the Stanford Invitational tomorrow.

“The boys’ 4x400m team was one of the most exciting ones because that’s four guys working together and ran the fastest time all year,” said head coach Peter Jordan. “They’re probably pretty high up on the top 10 in CCS.”

Several top Falcon runners were missing from the Hampton Phillips meet due to Frosh-Soph Top 8, which took place on March 28. Sophomore Karen Wai qualified for CCS Top 8 in the 1600m with a seventh place finish and time of 5:32.07.

The Falcons’ PR streak carried on from the March 27 meet against Fremont High.

The meet started off well with the girls’ 4x100m relay team taking first place. Nast and seniors N. Sabes and Katrin Cooper finished first, second and third, respectively, in the 1600m. Menezes came in a close second in the 1600m, followed by senior Will Perera in third.

Senior Walter Lam placed first in the 110m high hurdles. Junior Katie Gasik and senior Anna Souskova placed first and second, respectively, in both the 100m and the 300m hurdles.

Rachel won the 800m, followed by sophomore Jordan Leonard in third. In the boys’ 800m race, Banks ran to a strong first place finish with junior Michael Beam in third.

Both 4x400m relays, with the Sabes sisters and juniors K. Marsh and Ashley Cole running for the girls and Menezes, Banks, Yen and Marshall for the boys, won, with the boys getting an unofficial time of 3:34.

PRs started at the West Valley Relays March 22 at West Valley College, which featured dozens of teams from Hayward down to Hollister.

Cole placed seventh in the triple jump by jumping 31’-1.5”. State-ranked high jumper and defending CCS champion junior Kiersten Dolbec jumped her way to second place with 5’-6”.
Just two days before West Valley Relays, the Falcons defeated the Santa Clara Bruins at home in their third dual meet of the season.

The varsity girls crushed the Bruins with an astonishing score of 85-41. The meet started off well with the 4x100m relay finishing first at 52.1 thanks to two sets of twins: the Sabes and the Marsh sisters. Wai won the 1600m in 5:46.9.

The varsity girls are undefeated with a record of 4-0.

“Winning is fun, but improvement is really the best thing,” said Jordan. “People are running their fastest, jumping their highest this early in the season. It’s exciting. There’s no telling how far we will go.”