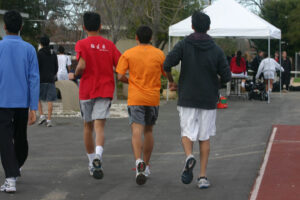 With fewer seniors this year in comparison to last year, this year’s track and field team is considered relatively young. However, as long distance coach Danny Moon puts it, perhaps “the strength is in the youth.”

With fewer seniors this year in comparison to last year, this year’s track and field team is considered relatively young. However, as long distance coach Danny Moon puts it, perhaps “the strength is in the youth.”

Head coach Archie Ljepava’s main focus this season is for track to grow as a program. He also hopes the team will aim for a league title and work together to get there.

“I want to make Saratoga a program that’s on the maps of all the big schools,” Ljepava said.

As for the team, the athletes are expected to perform well, despite their youth.

“We should be pretty competitive. Our varsity girls’ program should be top notch this year. We should end up competing for a league title,” Ljepava said.

Ljepava believes that the teams in their league to watch out for are Homestead, Wilcox, and Monta Vista.

“Homestead will be a challenge this year for our women’s team. Wilcox is always a challenge for both our women’s and boys’ teams. Those are the two [where] we need to try to steal some points,” Ljepava said. “Hopefully we can get through them and get a league title.”

“[The biggest challenge is] keeping motivated and keeping dedicated to the team,” Chuang said. “[Being a senior] kind of puts pressure on you because you’re one of the few that want to lead the team and have some pride.”

Juniors Ailene Nguyen, Crystal Yen and sophomore Melodie Bellegarda are expected to lead the girls’ varsity team, which Ljepava has high hopes for. Nguyen and Bellegarda sprint and jump, and Yen sprints and hurdles.

“I’m looking forward to hopefully beating my 400 meter time from last year, and maybe making it to state,” Bellegarda said. “To do better, I have to be more positive, because I’m pretty negative usually. I need to be more confident.”

Moon believes that having fun and improving throughout the season are the keys to success. He is looking forward to having fun with his team of runners and enjoying the season as a whole.

“What I’m looking for is the athlete who has a desire to run and participate. It’s not about winning; [it’s about] success with each individual,” Moon said.

He finds that all the runners excel at their own events, whether it be the 800, 1600 or 3200 meter. His goals for the team involve helping everyone improve personally.

“[We try to] improve throughout the whole season, and hopefully we can have our best times at the end of the season. That’s usually the motto I work with,” Moon said. “It’s not what we do in the first part of the season, it’s how we get there.”