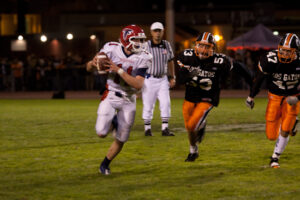 Not even an inspirational speech from 49ers coach Mike Singletary could provide enough fire for the football team to avoid its 30th straight regular season loss to Los Gatos on Oct. 23. The final score was 47-0.

Not even an inspirational speech from 49ers coach Mike Singletary could provide enough fire for the football team to avoid its 30th straight regular season loss to Los Gatos on Oct. 23. The final score was 47-0.

The day before the big game Singletary came to campus and spoke to the team during its Thursday night dinner. Parent Mary Guercio, who is currently organizing the wedding of Singletary’s daughter, offered to ask Singletary to speak to the team, and Falcon’s head coach Tim Lugo felt the opportunity would be beneficial to his team.

“Coach Singletary is an amazing man and a powerful speaker,” said Lugo. “The message he gave our players was the same message that has been preached since I got here. You have to believe in your teammates and believe in yourself that you can win games. Play the game for each other and not for yourself and you have a chance. As long as you have a chance, you can win.”
Junior linebacker Greg Johnson felt that the speech was an “inspiring experience.”

“He talked about his life and how he could have taken the easy way,” said Johnson, “but he felt like he needed to choose the harder way in order to grow and get
better.”

With high hopes and a new-found inspiration the team walked on to Helm Field looking to end a 29-year-old losing streak.

The Los Gatos Wildcats managed to score first and never looked back. Los Gatos senior quarterback Nick Hirschman, who has signed to play for Colarado University next fall, threw three touchdowns for a total of 181 yards in the first quarter.

“In the first half, I think we were intimidated by the atmosphere of Los Gatos’s Homecoming,” said Johnson. “We didn’t perform well mentally.”

From then on, the team managed to improve its defense but Hirschman still managed to throw in two touch downs. In the third quarter and fourth quarters, the Falcons put up a strong defense and only letting in two runs. By the end of the game, Hirschman had thrown for five touchdowns and over 400 yards .

“There’s a reason why [Hirschman] is going to be playing on Saturdays at Colorado University next fall,” said Lugo. “He stood at the line of scrimmage and checked his pass protections to our blitzes and there aren’t many high school quarterbacks who can do that.”

Although this game may have been disappointing, Lugo hopes to learn from this game and continue to work hard for the rest of the season. As the season comes to a close, the team has one final stretch of league games that could determine its CCS fate. In order for the team to make CCS they must close out the season by winning the remaining games.

“Everyone in this league is good, and that includes us,” said Lugo. “No one is going to be easy but we are capable of winning the last three games.”

Despite a tough loss to Los Gatos, Lugo is proud of the team and is confident that his players will play their best throughout the rest of the season and fight to earn a spot in the CCS playoffs.

“Our dedication to each other is our biggest strength,” said Lugo. “We’ve worked too hard to quit and I know our guys won’t. You learn something about yourself when you get knocked down and have to get back up. Unless you play the game, you don’t understand that. Our guys will get back up and play the game of their lives on Friday night.”

The team played the Mountain View Spartans on Oct. 30, but due to printing deadlines, the game could not be reported. For more information on the game, visit www.SaratogaFalcon.org/sports. The Falcons will play their Homecoming game against the Cupertino Pioneers tonight at Benny Pierce Field.